In the midst of the Big Bad Darkness cloud hanging over Supernatural‘s Dean and Sam in Season 11 (premiering Oct. 7), there’s a silver lining: their dynamic is not “so headbutt-y” anymore , executive producer Jeremy Carver tells TVLine. (Should we send The Darkness a gift basket for uniting the brothers?)

Still, the new foe will cause major problems for the Winchesters — like making their past relationships very much present — and shake things up for the denizens of both Heaven and Hell.

TVLINE | Dean and Sam are working together. But are things completely copacetic between them?
It’s not that I don’t think things are copacetic — they’re very much on the same page — but there are always extracurricular things going on that they have to work through. But it’s not quite so headbutt-y as it may have been in the past. They very, very much have the same agenda, and they’re both confronted at separates times during the beginning of the season with different ways of getting there. It’s figuring out how to deal with that individually and with each other. But they’re very much united in what they ultimately want. 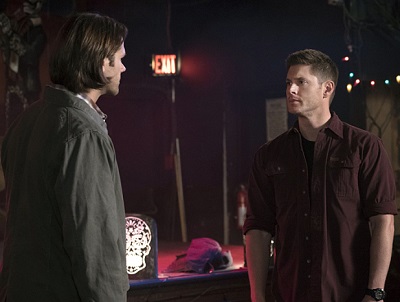 TVLINE | Are there any residual issues from what went down at the end of the Season 10 finale between Dean and Sam?
They try as hard as they can to put that behind them, particularly in the first couple episodes, understanding the shared culpability for what is happening. There is residual fallout just from what happened that they’re going to have to deal with, but not necessarily a residual anger toward each other.

TVLINE | The theme of the season is, “You can’t outrun your past,” which sounds like a very personal arc. How does that connect to the bigger storylines and mythology?
The idea of the mythology this year is presenting another Big Bad to take on, which is this Darkness. As responsible as the boys feel for having released The Darkness and how much they personally want to defeat it, they’re not going to be able to do it alone. They’re going to have to confront some figures from their past. They’re going to have to make some unexpected and unholy alliances involving folks from their past, which will have personal ramifications, as well — because these are some pretty significant figures from their past.

TVLINE | Not all of the show’s bad guys have immediately been confrontational, adversarial villains. Is that the case here, where maybe The Darkness isn’t all terrible?
One of the cool things about this season is how much mystery and – I’m going to make up a word here – “unknowingness” there is to what exactly is going on. There’s a lot of mystery to not only to what or who The Darkness is, but what The Darkness wants. That’s something the show takes its time building and playing with, and it really causes the brothers some fits. They desperately want to punch something;  they’re just not sure what to punch.

TVLINE | How do the angels and demon respond to this new pre-biblical entity?
I’ll just say that The Darkness is of such enormous order of Big Bad for us, in terms of its power, that I don’t think it’s talking out of turn to say that even the angels in Heaven and the demons in Hell are scared of what this thing could do to their way of life. Everyone’s got a stake in figuring out how to deal with it. 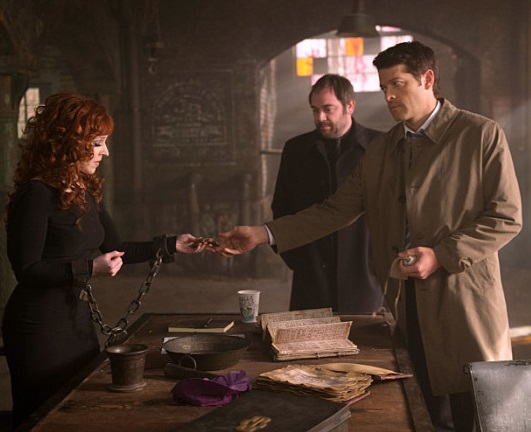 TVLINE | Is Castiel working with the Winchesters in figuring out how to deal with The Darkness?
Castiel, first and foremost, has to find a way out of this spell that Rowena has cast on him — and that’s not as easy as it may sound. Being under the influence of this spell is going to lead him to some pretty uncomfortable situations. So for Castiel, we’re going to see him in something of a vulnerable state early on in the season. He is working alongside the Winchesters while at the same time trying very hard to reestablish or redefine what his place in the universe is. He is, essentially, finding a way to get his mojo back.

TVLINE | Assuming he lives, how will the Crowley and Rowena relationship develop? Will he step up and try to get payback for all her manipulations of him?
We can assume that. We saw toward the end of last season, and we’ll certainly see beginning of this season, that this bromance that we all had so much fun with, with Crowley and Dean, has soured. So we’re going to see more of a vintage Crowley here in terms of scheming, being less caring about Dean and Sam, and very much trying to figure out how he himself is going to navigate this new world where The Darkness threatens just about everything.

In terms of his relationship with his mom, I don’t think there’s any question that he harbors a grudge and will put a certain amount of effort on getting revenge on her. It’s one of the fun things to see this season is how when they eventually are in the same room again, how they relate to one another given all the bad blood. That’s one of the, I would consider, more delicious parts of the season.

TVLINE | You cast Emily Swallow as the character Amara. Who is she and how does she fit into the mythology?
I can’t say too much. That’s one we want to let play out on screen. Emily has brought the character to life in a way that we’re just thrilled over.