There seems to be an unspoken rule in the TV industry these days: A show isn’t truly cancelled until another network or streaming service fails to resurrect it.

But upon hearing that Under the Dome would not be returning for Season 4, executive producer Neal Baer had no desire to shop the CBS series to another platform.

“I’m very happy with this ending. I feel very satisfied,” Baer tells TVLine. “We made it so there could be another [season]… but it wasn’t necessary.”

Thursday’s series finale found the dome around Chester’s Mill finally coming down, though it wasn’t exactly a celebratory time for the residents. Sam and Junior — who were both brainwashed beyond repair — were killed before the hour was through (the latter at the hands of his own father). Kinship leader Dawn, who was initially presumed dead, resurfaced one year after the dome’s disappearance to get her hands on a new and dangerous egg. But if you’re a Barbie/Julia fan, there’s no need to worry: They’re engaged!

TVLine spoke with Baer to discuss Dome‘s final hour, Stephen King’s involvement with the series and the only possible storyline that a fourth season would bring.

TVLINE | You said before Season 3 started that all of our questions about the dome would be answered. Were you approaching this finale as though it would be your last episode?
Yes and no, in the sense that we didn’t know if there would be a fourth season. We wanted to have a satisfying conclusion that made the audience feel like they had been on this journey and there was an end to it. In a way, we gave ourselves an ending that really ended the show. We put Barbie and Julia together, they’re going to get married. Big Jim’s a congressman. Junior — who was so disturbed by the end — is gone. Sam, who was so filled with guilt, is gone. There’s hope for Joe, because we know that Norrie is indefatigable and will save him. Yes, there’s an egg that remains that Dawn has seen, but we can feel confident that our team of Barbie, Julia and Big Jim, along with Norrie, will come to the rescue yet again. We have this very satisfying ending with all of our characters. 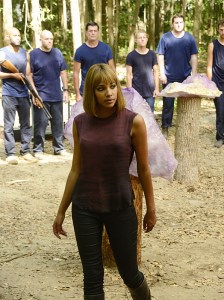 TVLINE | Were there any other ideas in the writers’ room that involved bigger cliffhangers, or different scenarios in which, say, Junior didn’t die?
We didn’t really [come up with any]. When we talked to the network about it, we wanted it to be fulfilling, and these were the ideas that we pitched to the network that they really liked. We really played out the dome, you know? Every kind of terrible environmental problem or catastrophe affected them. What more was there to do? We had to give answers this year. We played the first year as, “How can we deal with this? How are we going to get along as people?” The second year we played, “Is the dome good or bad?” and faith versus science. And this last year, we played the individual versus the group and the evil within. Is there hope of getting out, and how are we going to do it? And we gave viewers the clues at the very beginning of this season as to how they were going to get out — the eight notes. We started whistling those notes early on in the season, and that was the key to answering how the dome would come down. We did an incredible amount of planning, if you look over the whole season and see how it all comes together.

TVLINE | Given the cliffhanger in Thursday’s finale, what would a possible Season 4 have looked like?
They would have gone someplace else, and the dome would come down over another place. [Laughs] But then it would be like, “Then what?” Would we do the same thing again? It would have been a real challenge. I went on this incredibly interesting adventure that was a parable for sustainability in our world, and now, it’s up to us to live the real life and do something about it.

TVLINE | The show was initially adapted from Stephen King’s novel, and he wrote the Season 2 premiere last year. How much involvement has he had in this final season?
He’s always been a wonderful voice of reflection, talking to us whenever we have questions. He’s always been supportive with the fans in saying, “It’s not a rendition of the book, it’s its own thing, but it has a lot of elements from the book.” He’s always just been a real supportive force.

TVLINE | With three seasons under your belt, were there any storylines you didn’t have time to explore that you wish you’d had time for?
The only thing I wish we could have done is bring back everybody in avatar form — Angie, Linda, Dodee, Reverend Coggins. My other desire — but it’s so difficult to do in TV, because there’s so many different characters — was to bring back [Norrie’s mom] Alice, like we did in Season 2, where we brought Dodee or Angie back. I would have loved to have a whole avatar scene where they’re all just haunting Big Jim. [Laughs] That would have been my dream.

Under the Dome fans, what did you think of Thursday’s series finale? Grade the episode via our poll below, then hit the comments to back up your choice!