This will put a grin on your Fancy Face: Days of Our Lives‘ Bo will be back in Salem very soon — and we’ve got your exclusive first look at portrayer Peter Reckell’s return.

Reckell will begin airing on Tuesday, Sept. 8, as part of the NBC soap’s ongoing 50th anniversary celebration. In the photo below, he and co-star Stephen Nichols (aka Patch) flash big smiles on set at the Brady Pub.

The daytime drama is marking the milestone with a murder mystery that began earlier this summer, facilitating the return of fan favorites including Alison Sweeney, Thaoo Penghlis, Martha Madison and Nichols. The killer will be revealed during the week of Nov. 8.

Reckell has played Bo — brother of Roman and Kayla and (now ex-)husband to Hope — off and on since 1983.

Take a good long look at the photo below, then hit the comments: Are you excited about Days‘ 50th? 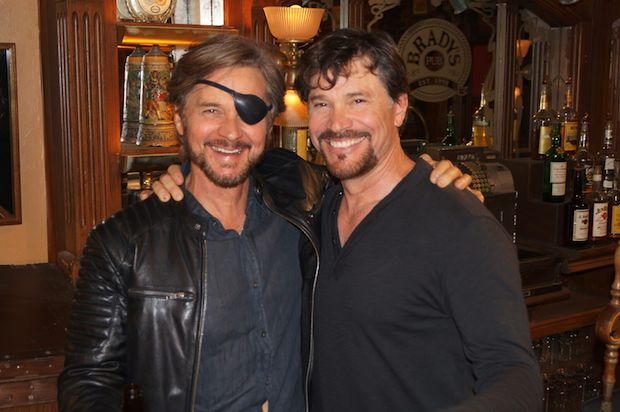