Bella Thorne made her triumphant return to Scream on Tuesday, bringing with her a twisted surprise from the past.

While peeping found footage on Rachel’s laptop, Noah and Audrey discovered a shot of Kieran and Nina at a bar together, which means he lied about not knowing her in the pilot. Emma was especially irked by this revelation — for good reason, considering her last boyfriend (RIP!) also had a past with Nina — but Kieran insisted there was nothing physical between them. In fact, he claimed he merely offered to drive her home after she’d had too much to drink.

And that was only Kieran’s first lie of the episode. 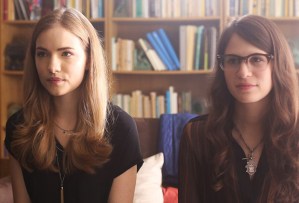 Earlier that day, Piper and Emma paid a visit to Brandon’s mother, who said that someone named Seth — aka the newly incarcerated Mr. Branson — came by asking questions about her son. However, a follow-up visit revealed that it wasn’t Mr. Branson, but rather Kieran, who came by to see her. (That’s strike two against Kieran, for those of you keeping score at home.)

RED HERRING | But not everybody was pointing fingers at Kieran this week. Noah remains convinced that Branson is the Lakewood Killer; he even went so far as to claim that “Branson” is short for “Bran’s son.” In Noah’s defense, for a guy alleging his innocence, Branson said some really weird stuff during his chat with Emma. It also didn’t help his case that, just when the video of a bloody Sheriff Hudson began projecting at the dance, it was discovered that Branson had escaped. (You know, it’s almost as if the writers are trying to throw us off!)

PUMPING THE ‘BRAKE’ | In relationship news, Brooke and Jake hit yet another road block when they started bickering about Branson. She tried to defend him, Jake threw her crappy family life in her face, and before either of them knew it, she was out the door. Brooke decided she couldn’t stay at Chez Fitzgerald any more, so she returned home to throw an anti-dance party — because, you know, the only thing serial killers love more than dances are parties. (Side note: Am I the only one ‘shipping these two? I feel kind of alone here.)

Scream-ers, with only one episode left this season, who’s your final guess for the Lakewood Killer: Branson? Kieran? Secret Option C? Drop a comment with your latest theory below.