Sir Patrick Stewart has made a career of playing sharp, smart men who issue orders, inspire masses and sometimes save the universe.

A British war vet with a nightly show on an American cable news channel, Walter wants to exude the gravitas of a trusted anchor but frequently finds himself too drunk to stand, too high to focus and occasionally — as is the case in Saturday’s series premiere (9/8c) — pursued by the police while nuzzling a transsexual hooker’s chest.

Despite Walter’s rather long list of foibles, Stewart tells TVLine, the desire to take care of his audience remains his guiding principle.

“That’s a little grandiose, not to say obnoxious, but he is committed to that, and I admire and respect him,” he says. “He is not pursuing a political line. I think he’s left of center, but he doesn’t have an agenda that is political.” Rather, Walter is obsessed with “fairness, opportunity for everyone and an insight into the lies that people can sometimes tell.”

The actor spent time on the sets of MSNBC’s The Rachel Maddow Show and Comedy Central’s The Daily Show With Jon Stewart — and quizzed Piers Morgan — to get a feel for life in the newsroom. Series creator Jonathan Ames (Bored to Death) says Stewart’s research helped bring to life “a character that’s a little bit of a diva… There’s only a few people that have the charisma to be able to demand this kind of attention and play this kind of role.”

In separate interviews, TVLine chatted with Stewart and Ames about Walter and his pack of news-minded misfits — and whether we should expect certain crew members from the Enterprise to show up in Walter’s world. Read on for the highlights.

TVLINE | I don’t think you’ve had a role quite like this before.
STEWART | Nobody has. Well, there’ve been glimpses. My one appearance in the last season of Frasier, when I wanted to become Frasier’s lover, and we were going to have a wonderful power relationship. Didn’t work out. And of course, in Ricky Gervais’ Extras, there was an opportunity for Patrick Stewart to appear as someone other than the popular impression. And I have been able to make hay with that idea for the first four months of this year, and it’s been a liberating experience.

TVLINE | We see your character ingest a lot of substances in the first few episodes. Is Walter Blunt ever stone-cold sober?
STEWART | Oh yes. Plenty.Sometimes he may be stone-cold sober, and have a hangover. Is there ever a moment when he is stone-cold sober, and doesn’t have a hangover? I’m sure if I thought long enough, I could find one… [Laughs] He needs to get a grip on his life. He really does. And he tries, and he wants to, because he realizes that he’s messing up again, and again, and again, relationships, his profession, family. But it’s a struggle for him. 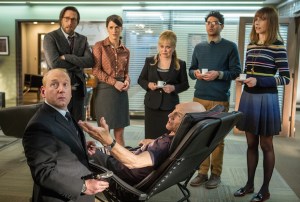 TVLINE | You conceived this part with Patrick in mind. What about him made you think that he’d excel at this kind of absurd comedy?
AMES | This is like, if someone gave me cloth, I made a suit that I hoped would fit him, just based on having been a viewer from the outside. And then, starting to meet him, I thought and felt — and still do — that Patrick has a certain bearing, and formidable nature.

It seemed like a good backstory for [Walter] — let me play upon this military bearing. Like, any war is a disaster, and it was the war that galvanized him to become a pacifist, or to seek change, not through the sword, but through the pen. You know, to be obvious. It was Patrick’s bearing, and how I’d seen him in other roles, that made me want to make him a hero, someone who quests, like a Don Quixote — or like something in Monty Python.

TVLINE | What does Walter’s trajectory, which starts off in a very shaky way in the premiere, look like over the course of the season?
STEWART | He, as a result of his experiences in [Episodes] 1 and 2, is determined, even more than before, to bring the truth about the world to the American people. That the most responsible thing he can do, as a man in the media, is to be honest, outspoken, and frank with his audiences. And by so doing, will make America an even better place to live. Now, that’s a little grandiose, not to say obnoxious, but he is committed to that, and I admire and respect him. He is not pursuing a political line. I think he’s left of center, but he doesn’t have an agenda that is political. He has an agenda, which is about fairness, opportunity for everyone, and an insight into the lies that people can sometimes tell.

TVLINE | Starz gave the show a two-season order right from the start. Did you see that coming?
AMES | We were hoping —going in with a strong script, an amazing lead actor, an incredible executive producer and staff — that we could get a season order. But then when Starz came through with two seasons, it was like, holy s–t. It was like, what? No one saw that coming.

TVLINE | There’s a Star Trek: The Next Generation cast member who has a cameo very early in the premiere. Should we expect more of those?
AMES | I wanted to, because one night I had drinks with Patrick and his crew, and they were all such interesting individuals, and I immediately thought of Brent [Spiner] as a melancholy piano player, because he is a piano player, a musician…. I wasn’t able, timing-wise,to have the other guys on. Then, the other night at the premiere, I met LeVar Burton, and I’m like, I’ve got to work some of these people in.