Yvonne Craig, best known as Batgirl in the 1960s’ Batman series, died Monday at her home in California. She was 78.

According to reports, Craig was battling breast cancer that recently spread to her liver.

The actress played Batgirl (and her alter ego Barbara Gordon) in nearly 30 episodes of Batman. “I used to think the reason they hired me was because they knew I could ride my own motorcycle,” Craig said in Les Daniels’ Batman: The Complete History. “I realized they hired me because I had a cartoon voice.” 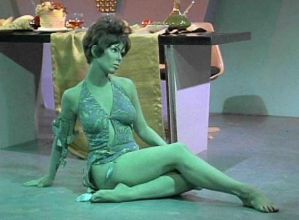 included a Season 3 Star Trek stint as an Orion Slave Girl (right) as well as guest appearances on The Man From U.N.C.L.E., Fantasy Island, The Many Lives of Dobie Gillis and The Mod Squad. More recently, she provided the voice of Grandma in Nick Jr.’s Olivia.

Craig is survived by her husband, Kenneth Aldrich.