AMC’s Humans finale, which aired Sunday, found both its human and android characters in vastly different places from where they started in the premiere — and executive producers Sam Vincent and Jonathan Brackley say that watching you watch their show was nearly as entertaining as the drama itself.

“There were a couple of excellent guesses, yeah, when we were browsing through Twitter,” Brackley tells TVLine. “Some people really looked ahead and nailed it. But mostly, everything played as a big surprise. It was very enjoyable for us.”

In particular, the reveal that by-the-book cop Karen was actually a synth — short for “synthetic human” — had viewers ready to short-circuit.

“The vast majority of people didn’t see anything at all like that coming,” he adds, calling the online feedback “a real treat for us.”

The season-ender, then, likely has fans squealing into their source code. Among the highlights: Max is revived from the dead, Dr. Elster’s family connects to bring the synth-consciousness program to fruition, Fred is revealed as a sleeper agent for Hobb and —with the Hawkins’ family’s help — the synths evade capture. Also of importance: Niska decides to strike out on her own; later, we see that she has secretly taken a copy of the consciousness program with her.

Brackley and Vincent gave us the lowdown on what the renewed series  — which is based on the Swedish Real Humans — will look like in Season 2. Read on for all the details.

The Swedish series on which Humans is based has gone two seasons. How closely are you planning to stick to what happened in that series’ Season 2?
VINCENT | It’ll be a further departure. That’s not really a deliberate choice to look at the second season and say, “We’re going to do something really different.” It’s very much a reflection of the organic process of adapting something. If you watch our first episode, you’ll see many, many similar things to the first episode of the original, but then you make one or two little changes and in the process, those changes magnify… What we definitely will do is steal every great thing we can from the original. [Laughs] But I think for Season 2, we’ll be looking at the original more as a… treasure chest than a blueprint. They have so many wonderful and brilliant ideas, and even if their stories are going down a different track, we can just cherry-pick everything that works for us.

In the original series, the Dr. Millican-esque character shows up as a grief-bot after his death. Accordingly is there any possibility we’ll see William Hurt in Season 2?
BRACKLEY | Well, we’re not going to rule anything out. [Laugh] Tonally, there is a question of whether that would work in the tone of our show, which is a bit different from the Swedish one. It’s questionable whether William Hurt arriving in a box at the door would be right for the tone of our show. It was for theirs; it was great. It was a bit creepy, it was funny, it was fantastic and weird. We’re not ruling anything out at this stage and that’s all I can say on that at the moment.

Will you delve deeper into the anti-synth movement next season?
VINCENT | One of the ways we’re going to approach it is to move the world on a little bit — and I’m not talking jumping ahead years or anything. Just a few months. But what I mean is the synths in society: We’re going to the next level… They’ve gone a bit deeper. They’ve moved into new areas of employment. They’ve moved into new areas of our personal lives… You’re not coming back to a status-quo society. Things are developing fast, as technology does in all areas. There’s lots of new, society-wide effects which we’re going to tell stories in.

You undid Max’s death. Why did you choose to revive him?
BRACKLEY | It’s a multifaceted answer. A lot of it was down to Ivanno Jeremiah, the actor, doing such a wonderful job. He was obviously written as an innocent; we wanted to do the machine-as-innocent. But Ivanno did that so well and so interestingly, we questioned the decision as we went. Also, equally as importantly… [there was] the emphasis on this idea of reunion and why they all had to be back together, and how that wouldn’t have really worked if we’d lost one of them. 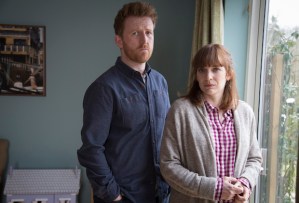 Will the Hawkins family have a similar role in Season 2 as they did this season? Or is the plan to diminish that?
VINCENT | We think the Hawkins family is such a great way into the story, such a great way to ground the story — the actors all did such a wonderful job with that. But absolutely, you’re right: They’re one of the key changes in thinking about [Season] 2. Saying, “Well, it’s kind of easier to write the high-stakes thriller story of these incredibly advanced and curious machines that people want to get their hands on and people are fighting over and lives are risked.” It’s quite easy to see where the drama comes from there.

The big challenge for us is to create stories for [Season] 2 that bring the Hawkins family back into it. We can tell those ground-level, domestic, really emotional stories that we did in [Season] 1 but we can also tie them into the bigger story and the jeopardy-filled aspects of the plot… If we can do that, that’s very satisfying: to see these very ordinary human beings with these very extraordinary machines. We think we’ve cracked a couple of good ways to really tie them back into the big story.

That’s good, because I want to see how Joe and Laura proceed past the events of the finale. It seems like she’s forgiven him a little bit, but dealing with what he did to Mia seems like it would take a while to work through.
BRACKLEY | We certainly didn’t intend it to be completely resolved. It’s too big a divide between them to resolve in such a swift way toward the end of that episode. At the very end of [the finale], when they come back into the room together, they exchange a look. We intended that look to be slightly ambiguous. We certainly didn’t want a happy smile or nods of understanding between them. There’s certainly a note of division that’s something we’re going to explore in [Season] 2.