Question: Can you give some Grey’s Anatomy spoilers, specifically Arizona and Callie? —Barbara
Ausiello: Shonda Rhimes gave me some additional intel on the “exciting romances” Callie and Arizona will be embarking on in Season 12. For starters, their new squeezes will not be characters we’ve met before. Additionally, “They’re going to both be dating women,” Rhimes confirms, adding, “I do want to honor the fact that Callie is bisexual, and we’ve established that she’s dated guys. But in terms of where she’s going now, she’s going to be dating a woman.”

Question: Haven’t heard much about Grey’s lately. How is Shonda Rhimes planning to keep Season 12 fresh? —Isaac
Ausiello: Well, for starters, Maggie will be a little less homeless. “I can tell you straight up that Maggie has a home,” declares portrayer Kelly McCreary. “Remember how we never saw last season where Maggie lives? Now she lives with Amelia and Meredith in Ellis’ house, which is super cool. There will definitely be some conflict, but of the hilarious variety as opposed to the sisters-pulling-each-other’s-hair-out variety. You can expect some ‘clashes of the titans’ going on.” McCreary also confirms that Rhimes plans to “explore Maggie’s love life some more” in Season 12.

Question: Is there going to be a time jump when Castle returns? If so, how long? —Gabi
Ausiello: “Only a few months” will have passed since the events of the Season 7 finale, co-showrunner Alexi Hawley says. But oh, how much has changed! (And that’s not even to mention the new little one Ryan and Jenny have on the way.)

Question: What intel can you give us on the upcoming season of NCIS? —Marsha
Ausiello: This much you probably know: With Gibbs having been shot, “The premiere picks up right at that moment, and [guest star] Jon Cryer is coming in to do his darnedest to save Gibbs’ life,” Brian Dietzen shared with Matt Mitovich. But this next bit is probably news to the NCIS faithful: “Jimmy Palmer is some of the glue that keeps the characters together — meaning he’s the confidant, he’s the friend,” Dietzen reminds. “But by the end of the year, his friendships versus his professional obligations are really going to be tested, specifically with DiNozzo. That friendship will be super-tested.”

Question: How will Arrow’s Captain Lance and Laurel react to Sara returning, again? —Jake
Ausiello: Frankly, it could be the last thing Sara’s family needs! “Thanks to Laurel helping him see the light at the end of last season, Lance is back on the wagon for now, trying to keep on the straight and narrow,” Paul Blackthorne previews. “But that will of course be tested when Sara comes back from the dead. Because I think when your daughter’s coming back from the dead, she may not necessarily come back as quite the same person. Yeah, that’s going to be an issue for the family to deal with!’

Question: Any scoop on how The Flash‘s Wally will be related to the Wests? Brother? Cousin? And how he will appear on the show? —Cilla
Ausiello: It sounds like the spinoff will be putting its own twist on Keiynan Lonsdale’s junior speedster when it returns on Oct. 6. “We are a doing our special Flash magic where we take a comic book character and give it just a little bit of a ‘Hmmm,’ so that you’re like, “Oh!” showrunner Gabrielle Stanton says. And while she’s mum on specifics, Stanton did tease that Wally will be incorporated “in a really, really cool way… that I don’t think the audience will see coming. He will definitely have a very interesting and close relationship with Team Flash.” 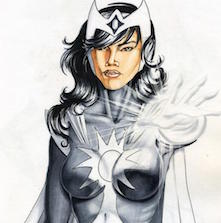 Question: Flash scoop, please! —Tatiana
Ausiello: Arrow addicts may recall Cisco and Caitlin making mention of ex-S.T.A.R. Labs employee Doctor Light when they first appeared in Season 2’s “The Man Under the Hood.” Turns out, that was some stealthy foreshadowing. Stanton tells us that the metahuman will turn up this season on The Flash — but “it’s going to be the female version” of the character.

Question: Is the plan still to not replace Jennifer Love Hewitt on Criminal Minds? If so, any word on the actors/characters that will be rotating in? — psquared
Ausiello: As of Monday night, only Aisha Tyler — who is filling the brief void created by the tail end of JJ’s/A.J. Cook’s maternity leave — has been tapped to step in, showrunner Erica Messer told us, “and there’s still no one replacing Kate. But we’re looking forward to the opportunity to bring in other ‘good guys’ to be guest stars.” Perhaps even via a second stint by Tyler, who will exit when Cook returns. “We’d love to have her come play as often as possible, because she’s amazing and she fit right in with the cast,” Messer raves.

Question: I spent the entire weekend catching up on Jane The Virgin, and I need some scoop! —Dominic
Ausiello: Just as Jane’s pregnancy served as the CW dramedy’s main storytelling engine last year, Season 2 will have an equally compelling A-story. Or two. “There’s definitely a long-term mystery that has to do with Sin Rostro,” executive producer Jennie Urman previews, adding that the season will be “building” to Jane’s wedding — but to whom? “She makes a choice in the first five [episodes]. Whether that’s the choice or a choice, I can’t say,” Urman teases of Jane’s Rafael-Michael dilemma. “We play a little bit [with the] who, and then she realizes who she wants to be with at this moment.” 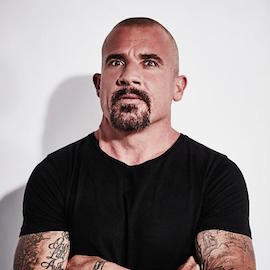 Question: I’m excited for the new Prison Break series, but I still don’t quite understand how they’re going to get around the fact that Michael is dead. Any insight? —Ed
Ausiello: According to star Dominic Purcell, “When you see it, it makes perfect sense… It’s justified.” Personally, I’m not one to argue with Dominic Purcell, mostly on account of the fact that he scares the s–t out of me (see Exhibit A, right).

Question: I’m psyched that Constance Zimmer is getting more work, but I’m also a huge UnREAL fan — please tell me that her S.H.I.E.L.D. gig won’t affect my new favorite show! —Janna
Ausiello: I’m happy to report that won’t be the case. “She’s committed to us and the show,” UnREAL boss Marti Noxon says. But here’s the bummer: The reason the double-duty won’t be a problem is because the Lifetime dramedy probably isn’t going to start shooting “until next spring,” Noxon laments.

Question: I was wondering if you have any new Downton Abbey scoop. —Kristen
Ausiello: I do! Michelle Dockery tells us that Mary will be in “business mode” when the sixth and final season bows in January, adding that her perpetually messy “romantic life” takes a backseat, initially. “She’s taken on the role of the estate agent because Branson’s left, so she’s a working girl. She’s not really actively looking for anyone.” Well, not until Matthew Goode’s Henry Talbot re-enters the picture. “He comes back into her life [and] it’s complicated as it always is,” Dockery shares. “It’s never plain sailing in her love life.”

Question: I’m desperate for some Bones scoop! Things have been quiet for way too long now. —Claudia
Ausiello: Angela and Hodgins are going to make a little noise this season. Even though they didn’t move to Paris in the finale, “They have a really interesting, emotional, powerful arc,” teases executive producer Jonathan Collier. “We’re taking them on a ride.” Adds EP Michael Peterson: “In Episode 10, everything will change for them.”

Question: There are lots of rumors of Noel Fisher not returning for Shameless Season 6, yet he was at the table read for the first episode…. — Sam
Ausiello: We hate to be the bearer of bad news, but star Cameron Monaghan told us Mickey “is in prison for attempted murder at this point, so it’s hard to keep him heavily involved [in the new season],” which picks up a few months after the finale. In the meantime, Ian is trying to “find some stability in his life” via medication for bipolar disorder and a job at the diner with Fiona. Bonus Spoiler: Monaghan thinks Debbie’s possible-pregnancy plot will be the most surprising for viewers, and here’s why: “She has a big decision to make and this decision is one that someone her age probably shouldn’t be making.” 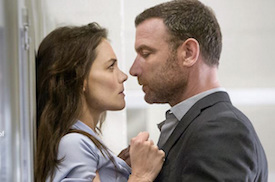 ♦ Confession: I had extremely low expectations about Season 3 of Ray Donovan when I heard that series creator Ann Biderman would not be involved. It’s a rare show that doesn’t self-destruct when the main creative force exits. But, miraculously, five episodes in, I’m happy to report that Ray has improved on its first two seasons. I (occasionally, rarely, mostly-never) love being proven wrong.
♦ I’ve learned that the second hour of The X-Files‘ six-episode revival — the Glen Morgan written/directed “Home Again” — will pick up several months after the events of the premiere, and word on the streets of Vancouver is that the installment (featuring, as I previously reported, a Monster of the Week called “Band-Aid Nose Man“) is absolutely brutal. Some are already dubbing it one of the most violent X-eps in history. Speaking of Episode 2, did you see this?!
♦ Bates Motel‘s upcoming fourth season will bring back Ryan Hurst’s “crazy mountain man” as well as some familiar faces “from Season 1 that you haven’t seen in a while,” showrunner Kerry Ehrin tells me.