USA Network has set premiere dates for Season 2 of its infidelity-infused drama Satisfaction, the new futuristic drama Colony and others.

Starring Matt Passmore and Stephanie Szostak, Satisfaction returns Friday, Oct. 16 at 10/9c. In Season 2, Neil and Grace confront their infidelities from the past six months, while Adriana (Katherine LaNasa) schemes to keep them apart for good.

Next up, Chrisley Knows Best resumes Season 3 on Tuesday, Nov. 10 at 10 pm, where it will lead into Donny!, a new scripted comedy featuring a fictionalized version of famed ad man Donny Deutsch. 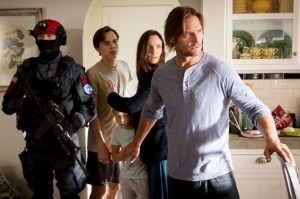 Josh Holloway (Lost) and Sarah Wayne Callies (The Walking Dead) as the heads of a family struggling to bring liberty back to the people of an occupied Los Angeles — will premiere Thursday, Jan. 14, 2016 at 10 pm, where it will lead out of WWE’s two-hour SmackDown. Carlton Cuse (Lost) and Ryan Condal (Hercules) serve as executive producers.