Jaimie Alexander‘s Jane Doe has a lot to fear in NBC’s fall drama Blindspot — but a needle is apparently not one of them.

TVLine can exclusively reveal the official poster for the upcoming series, in which Alexander’s amnesiac emerges from a duffel bag in Times Square, only to have her many tattoos spark a mystery involving FBI Agent Kurt Weller (Sullivan Stapleton, Strike Back).

In the image below, Jane Doe is tasked with “piecing together her past” alongside Weller, but judging by the amount of ink on her body, it won’t be easy.

Scroll down to view the poster for Blindspot — which debuts Monday, Sept. 21, at 10/9c on NBC — then head to the comments and tell us if you’ll be tuning in. 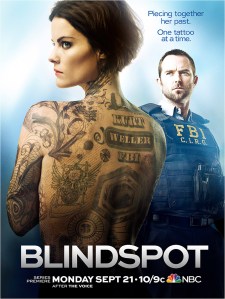