Jim Gordon might take up the most real estate on Gotham‘s official Season 2 poster, but that doesn’t mean he’s the focus of the Fox drama’s key art.

Rather, the image — which you can view in full below — highlights the baddies who will run the city in Gotham‘s sophomore season. Sure, The Penguin makes an appearance, but there are also a few new faces, among them Jessica Lucas (Gracepoint) as Tigress and James Frain (Orphan Black) as Theo Galavan.

The poster seems to have pulled its “Rise of the Villains” tagline straight from showrunner Bruno Heller’s mouth; Heller said at Comic-Con that Season 2 will focus on those who send Gotham on a “decline into chaos.”

Added star Ben McKenzie: “As the villains rise, there’s an arms race, and the good guys have to increase their force, as well. There’ll be new heroes introduced.”

Gotham returns Monday, Sept. 21, at 8/7c. Scroll down to view the full poster, then hit the comments with your thoughts. 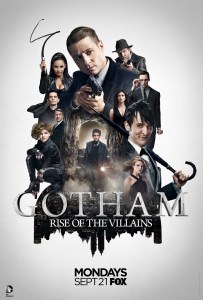