While much of the TV-viewing public was throwing its support behind #TeamShawn or #TeamNick Monday night, those UnREAL fans among us knew there was a far more compelling bachelorette with an even bigger choice before her:

Either way, there was plenty to hold your attention — even without the blackmail, sex on tape and double-dealing — in the second-to-last episode of the season. Read on as we review the major action of “Princess.”

BUSY BEAVER | In bed after her tryst with Adam, Rachel freaks. “This was a huge mistake,” she mutters, pulling on her clothes and skedaddling to her bunk, where Jeremy fell asleep waiting for her. When she wakes him up, he’s very cuddly and kissy, inviting her to spend the night at his place which — apropos of nothing — looks like it was decorated by Beauty and the Beast‘s Gaston. The minute they get there, Rachel asks for a shower, so eager is she to wash Adam off her. Of course, she and Jeremy get it on in there while the water’s flowing. Two guys in about as many hours? If you want, Rach, I’ve got some Aquaphor you can use — y’know, to help with the chafing.

The next day, Rachel tells a besotted Adam that she “just had to get you out of my system,” but the way she completely gives herself over to another kiss in the vineyard’s greenhouse belies her words. “Anna and Grace, it’s just fiction,” the Brit murmurs. “With you and me, we have something real.” And boy, do they — even the hothouse flowers in the background are fanning themselves for a little relief. 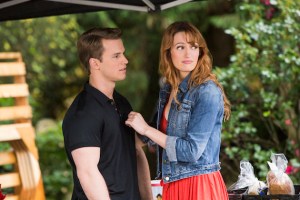 Still, Rachel insists on telling anyone who’ll listen — including Everlasting‘s bachelor himself and Quinn — that Jeremy is the guy for her and that they’re thinking of leaving the show for good. Meanwhile, Adam takes the competition’s remaining three contestants on dates at his vineyard: horseback riding with Grace, demolition (heh) with Faith and hot-air ballooning with Anna. Turns out, even Faith wants in on the Royal Renovations spinoff: If Adam picks her, she pitches, he can sleep around as much as he wants, and her “friend” Amy can come visit San Francisco and see that there are places where gay people live their lives out in the open. The offer is sweet and a little sad, and of course Adam good-naturedly sends her packing at that week’s elimination ceremony. Bye Faith. Your goofball charm really grew on me.

Next, Adam has to pick his overnight date, and he goes with Anna. Rachel just happens to find herself in the edit bay, where she’s not supposed to watch Adam and the blonde engaging in a bit of how’s your father, but she totally does — and is irked by it — then lies to Jeremy about what’s going on when he nearly catches her.

PAYBACK’S A QUINN | What’s going on with Quinn in the meantime, you ask? She tells Chet — who has no clue she saw Madison doing a very special job for him in the last episode — that she has to go see a gynecologist in Los Angeles… but instead, she’s meeting with Brad the Network Executive. Waving the flash drive, which we learn contains eight years of show ideas she hasn’t shared with Chet, Quinn appeals to Brad’s need for a new hit: Cut Chet out of the equation, and she’ll deliver something amazing. He’s intrigued, so they make a plan for her to pitch him series in the near future.

Back on the set, Quinn corners Madison and asks what went down (appropriate choice of words!) between her and Chet. “One thing led to another, and his penis was right there, staring at me!” the flustered PA says. In less time than it takes me to order at the Taco Bell drive-through window (extra mild sauce, please!) , Quinn gets the young woman to agree to press sexual harassment and assault charges against the show creator. Damn, that woman is efficient in her bitchery.

SEX, LIES AND VIDEOTAPE | Next order of business is to call Rachel to her office and offer her a partnership in Quinn’s new media company, the one she’s going to start as soon as she leaves Chet and Everlasting. Rach is flattered but turns her boss down, saying, “I just don’t want to be a woman whose life is this.” Stung, Quinn mocks her producer’s desire to leave the show and settle down with Jeremy, but Rachel doesn’t care… until Quinn stumbles upon the bedroom footage of Rach’s very naked British Invasion.

Unlike many of you thought, Rachel never intended for the sex tape to be seen — a cloth covering the camera fell off, unnoticed by her and Adam — and so she begs Quinn not to show it to Jeremy. The EP agrees, under the condition that Adam agree to marry either Anna or Grace and Rachel come to work for her.

CHET GETS WISE | Meanwhile, unbeknownst to Quinn, Madison has confided in Dr. Wagerstein about her interlude with Chet and the fallout with Quinn. “Nobody here does anything to be nice,” the shrink advises her, and then proves it by running to Chet to fill him in on his fiancée’s underhandedness. What does she want in return for helping him turn the situation around? A spinoff, of course. No offense, lady, but I’d rather watch Faith teach Amy about the Indigo Girls (“See, Emily is a soprano, while Amy’s the alto”) in Keeping the Faith or The Incredibly True Adventures of Two Girls in The Castro or whatever terrible name they’d give her spinoff series than invest time in you coaching fame whores through their “intimacy issues.”

Later that night, Rachel and Adam find themselves hanging out on the same rock in the dark. “You’re the one that I want. The other girls are paper dolls,” he says, a little drunk and a lot regretful that he got himself into this mess in the first place. He paints a very pretty picture of them escaping right then and there, flying halfway around the world and drinking bellinis on a beach. And just before the episode ends, the look on Rachel’s face makes me think she’s really, really considering his offer.

Now it’s your turn! What did you think of the episode? How do you think everything will shake out in next week’s finale? Sound off in the comments!