The Grinder‘s Dean Sanderson is many things, but modest is not one of them. At least, that’s what we’ve gleaned from the Fox comedy’s key art, which TVLine can exclusively reveal.

The fall series stars Rob Lowe as Dean, a beloved actor who played TV lawyer “The Grinder” for eight seasons. Upon returning home, Dean attempts to pursue a real law career, much to the chagrin of his attorney brother Stew (The Wonder Years‘ Fred Savage).

In the two images below, Dean proves he can’t get enough of the spotlight, flashing a big ol’ grin in front of glamorous Grinder posters. Stew, meanwhile, couldn’t look less impressed.

The Grinder premieres Tuesday, Sept. 29, at 8:30/7:30c. Scroll down to see the series’ new posters, then hit the comments and tell us: Will you tune in to The Grinder this fall? 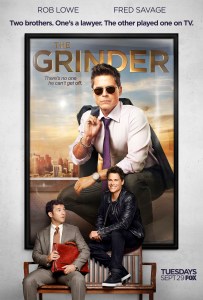