Fox’s Wayward Pines truly defined “limited series” by bringing its 10-episode storyline to a decided, dramatic close on Thursday night, while offering a non-maddening hint of what was ostensibly to come for the finale’s survivors.

To recap: With mobs of abbies scaling the powered-down perimeter fence and terrorizing the town, Ethan, Theresa and Kate did their best to usher everyone to safety via the Plot 33 bunker. Meanwhile, Pam confronted David, who had declared the town “too sick” to be saved and thus was ready to replace them with “Group C.” Pilcher then had his sis detained and thrown back into her cryo-chamber.

When the abbies infiltrated the bunker, Ethan was led to make the ultimate sacrifice and blow up the internal elevator, with him in it, thus crushing the many abbies beneath and blocking off superstructure access to any stragglers.

Ethan was not the only major death, 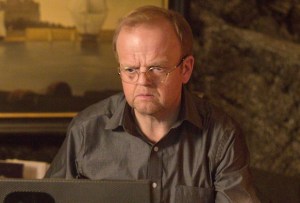 however. When a sympathetic guard freed Pam from her cryo-chamber, she returned to David’s suite and gunned him down, ending his run of ill-advised decision-making.

Wayward Pines’ destiny, though, may have remained unaffected. Because as seen in the final moments, Ben Burke wakes up from an injury sustained during the elevator shaft explosion to discover that more than three years have passed, during which the First Generation’s first class, led by bratty Jason, had orchestrated a coup, put all of the adults on ice and taken over the town, reckonings and all!

Here, showrunner Chad Hodge breaks down the finale’s big twists — including several that were not in the books — and reiterates his stance on the prospect for any return to Wayward Pines.

TVLINE | That was quite the finale. 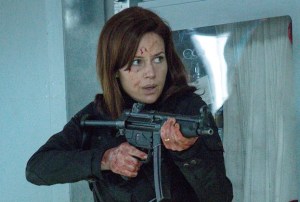 So much gunplay, organized chaos…
[Laughs] Yes, exactly. All in one little town. I was on set for just a little bit of it; it was safer in the editing room!

TVLINE | How many actors did you have made up as abbies at any given time?
I would say it was probably 12 or 13, and a lot of them were reproduced digitally.

TVLINE | How did your finale differ from how the book trilogy ended?
In Episode 9 you saw Pilcher shut the power down, which effectively let the abbies in to tear apart the town — that’s the same as the book. But the very end, with Ethan sacrificing himself, Pam killing Pilcher and the First Generation taking over years later, that’s different. [BOOK SPOILERS AHEAD] In the book, all of the adults — led by Ethan, who does not die in the book — decided to go back into suspension for another several-thousand years, because they realize that on this planet at this moment the abbies are in control.

TVLINE | Was there anything that author Blake Crouch especially enjoyed about the TV adaptation?
He was a consulting producer on the show and he also co-wrote Episodes 5, 8 and 10, so he was definitely a part of it. But one thing he really liked was how Theresa and Ben come to Wayward Pines, how you think that plotline 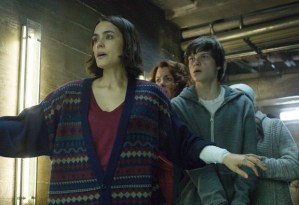 is happening at the same time [as Ethan’s], but it’s not; it’s 2,000 years earlier. In the book, Theresa and Ben have been in Wayward Pines for five years when Ethan arrives.

TVLINE | And at some point during that time jump, the First Generation staged a coup and threw the adults back into cryo?
Correct, yep.

TVLINE | I sense that if you had any druthers, you may have wanted to spend a bit more time with those rapscallions from “the first class.”
Yeah, they were great. Tom Stevens, who played Jason, is just fantastic. But yes, of course you want to spend a lot more time with things, but I really enjoyed the 10-episode model where it’s compacted and you’re forced to make decisions about what to use and what not to use. There’s really no excess fat on the story.

TVLINE | There were also some dots left to connect regarding the video journal left by Adam Hassler. He was, what, a member of some scouting party…?
This is something that is explored more in the book and something I wish we could have gone more into in the series. Certain people were sent out from Wayward Pines by Pilcher. They’re called Nomads and they were sent out to see if there’s anything else out there — what’s left, what resources we can use, what can we bring back…. And no one has ever returned. But [in the office beneath Plot 33] are their video journals.

TVLINE | As you filmed the very final scene with Ben roaming the street, was Charlie Tahan like, “I’ve got my own show now!”?
[Laughs] That’s so funny. You’d have to ask him, but that was intended to be almost a shot-for-shot replica of the way that Ethan enters town in our first episode. He wakes up in the hospital with a nurse standing over him, he escapes the hospital and then walks up Main Street where people are staring at him, and he’s in this weird town…. We literally did it shot-for-shot once he’s on Main Street.

TVLINE | So a theoretical Season 2 would be Ben trying to overthrow the “first class” brats and thaw out some adults as needed?
Honestly — and I’ve said it all along — it was never designed to have a Season 2. It was always these 10 episodes. So this ending was just intended to show that history repeats itself — ergo the episode’s title, “Cycle.” That no matter how many lessons you think you learn, violence continues and bad decisions keep getting made.

TVLINE | Did you purposely direct Ben’s hospital scene to let us think, if only for a second, that he had dreamed this whole thing?
[Laughs] No.

TVLINE | But you did want to have us guessing what the hell was going on. I mean, Amy’s suddenly a nurse!
We always want you guessing. But throughout the entire show, what we all tried to hold ourselves to was no lying or manipulation or “Just kidding!” Like, when Juliette Lewis’ character dies, she’s dead. When Terrence Howard’s character dies, he’s dead. When we say it’s 2,000 years in the future, it is. It’s all meant to be mysterious and “What the f–k is going on?,” but we tried not to do any manipulation.

TVLINE | How was this experience for you, working on a closed-ended series?
It was really, really satisfying and thrilling, and creatively challenging in all the best ways. Being able to say, “OK, we know were doing these 10 episodes, it’s based on these books,” you can really plan out the story and know what you’re doing instead of flying by the seat of your pants as you tend to do in the traditional model of network television.  It was nice to have it feel contained and not like a runaway train.

TVLINE | And yet we’ve seen some unexpected renewals with “single season” summer shows. Is there a scenario where Fox is looking over their numbers and they’re like, “Know what, we need this thing back”?
There’s nothing official to report yet. As I said, it was always designed to be one season, from a creative standpoint. But if anything changes, I’ll let you know!