Showtime has set a Sunday, Oct. 4 premiere date for the new seasons of Homeland and The Affair.

Homeland‘s Season 5 opener will air at 9/8c, leading into The Affair‘s sophomore premiere at 10.

Homeland will pick up two years after Carrie Mathison’s ill-fated tenure as Islamabad station chief. Struggling to reconcile her guilt and disillusionment with years of working on the front lines in the “war on terror,” Carrie finds herself in a self-imposed exile in Berlin, estranged from the CIA and working as the head of security for a German philanthropist.

The Affair meanwhile will continue to explore the emotional and psychological effects of an indiscretion that destroyed two marriages, and the crime that brings these individuals back together. This season, the drama will be told separately from four different perspectives, revealing four distinct truths.

Showtime also released Homeland‘s official Season 5 poster on Thursday. Scroll down to get a good look, then hit the comments with your thoughts on the two dramas’ returns. 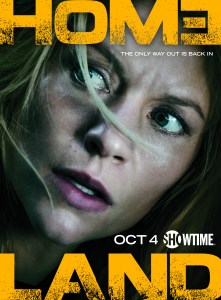