The Jim Gaffigan Show, which premiered Wednesday, might be an autobiographical sitcom based on the life of a popular stand-up comedian. It is not, however, about his career as a stand-up comic.

The eponymous vehicle is about Jim’s life as a well-to-do husband to wife Jeannie (Ashley Williams, How I Met Your Mother) and their attempt to maintain sanity all while raising five — yes five! — young children in a two-bedroom apartment.

In the premiere episode, their status quo is threatened when Jeannie suspects she’s pregnant with Child No. 6. And despite the fact that it’s a false alarm, Jim’s perpetually single friend Dave (Friends‘ Adam Goldberg) suggests a vasectomy before his pal somehow manages to create an entirely new race. Though Jeannie approves of the hypothetical procedure, she knows her husband won’t commit to any experience where he might have to endure pain. The rest of the episode finds Jim attempting to prove her wrong, all while doing everything he can to avoid a potential snip.

After Jeannie eventually arranges for Jim to meet with a urologist (played by Portlandia‘s Fred Armisen), she surprises him at the doctor’s office along with all their kids and judgmental best friend Daniel (Michael Ian Black, Another Period) to ensure Dave doesn’t talk her husband out of the consultation. When Jim and the doctor finally get a moment alone, all it takes is the sheer mention of an incision for the scaredy-cat to forego further consideration.

Overall, TV Land’s latest comedy is off to a promising start. Episode 1 is a bit of a different beast than the show Gaffigan becomes in subsequent installments (two of which are currently available on iTunes) with both its use of narration and indie film aesthetic dropped entirely. Furthermore, Jeannie becomes less of the stereotypical nagging sitcom wife she is sometimes presented as in the pilot.

Now it’s your turn. What did you think of The Jim Gaffigan Show? Grade the premiere below, then drop a comment with your full review. 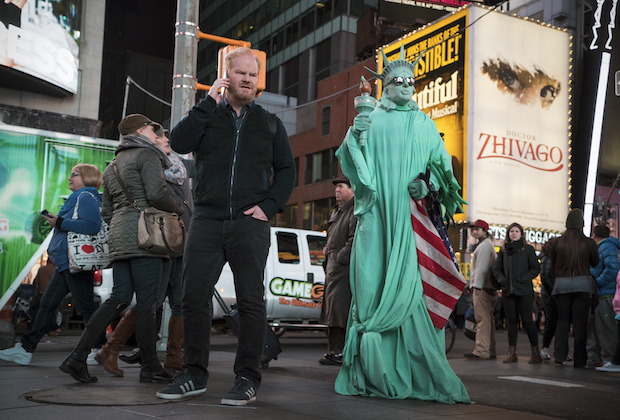