As revealed in the pilot for TV Land’s newest comedy, which premiered Wednesday, Michael Rosenbaum‘s character actually assumes someone else’s identity — the real pastor falls to his death while attempting to talk Buddy off a bridge — and inadvertently becomes the spiritual hero of an upstate New York hamlet. (Also, don’t apologize for feeling weird about seeing the former Smallville star with a full head of hair. You’re not alone.)

Impastor‘s first episode is an eventful one, full of misunderstandings (Buddy’s nearly exposed when he doesn’t seem to know what “scripture” means), off-brand shenanigans (he also smokes the weed he confiscates from a concerned parishioner’s stoner son) and an awkward sexual encounter with a microwaved cantaloupe (which I’d rather not get into right now).

Of course, Buddy’s big reinvention plan isn’t exactly fool proof. Not only does he feel guilty about abandoning his ex-girlfriend (Dexter‘s Aimee Garcia) back in the city, but he’s also being pursued by a pair of unforgiving thugs — and as you see at the end of the pilot, they’re not exactly amateurs when it comes to tracking down those who wrong them.

The only question is: Are you ready to join Pastor Dobbs’ flock after seeing the pilot, or are you damning it to eternal cancellation? Grade the premiere below, then drop a comment with your full review. 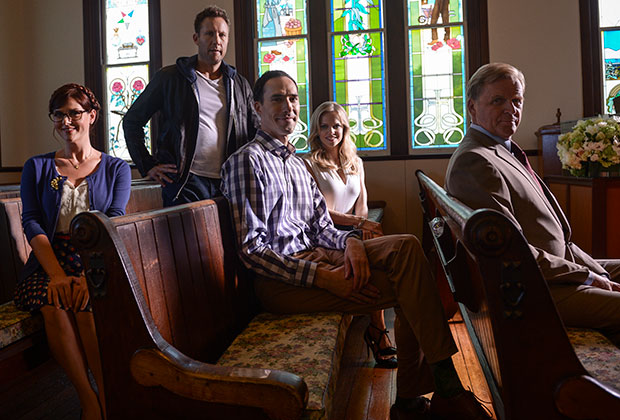