If you’re missing the Supernatural of yore, you’re in luck. Season 11, premiering Oct. 7 on The CW, is returning to its old formula — and bringing back some mysterious elements from Dean and Sam’s history.

“One thing we bat around in the writers room is, ‘You can’t escape your past,'” executive producer Andrew Dabb noted in the Supernatural press room at Comic-Con. “We’re bringing some things in from the boys’ past – some very distant, some much more recent – that we haven’t dealt with in a long time but will have some really interesting repercussions for both guys.”

But more imminently, since the season opener picks up right where the finale left off, the brothers must deal with the release of The Darkness and “figure out what that is, how far it reaches and how to fix it,” star Jensen Ackles explained.

Since the new Big Bad is pre-biblical, “we have no one to really turn to because no one really knows anything,” co-star Jared Padalecki added. “But I know that Sam and Dean will be side-by-side, and that’s f—ing cool.”

Ackles is equally pleased about the Winchesters’ united front. “One of things I like about [the Season 11 storyline] is it’s going back to the original format of having both brothers unaffected, meaning not drinking demon blood, not with the Mark of Cain on their arm,” he said. “[It’s] just Sam and Dean as Sam and Dean, fighting a common target.”

Having saved each other in spite of the greater good, the brothers will also be feeling some responsibility for what’s been unleashed on Earth. “I always like it when the boys do something, and it’s not that they’re held accountable, but they hold themselves accountable,” showrunner Jeremy Carver said. Sure enough, they’ll be laying on the guilt trip when it comes to The Darkness. “There’s a sense of, ‘We brought this. We did this.’ …. That means a return to, ‘We’re not going to ignore things. We need to go back to the very, very basics. It’s not just hunting things. It’s saving people.'”

“There were things they did in the old days that, somewhere along the way, they cut corners with,” Carver continued. “You’re going to see them trying very hard not to do that. And frankly, that’s a lot harder said than done, so it’s going to cause a lot more complications.”

At least they still have their trusty respite in the form of the Impala, which will be in every single shot in the upcoming season’s fourth installment. 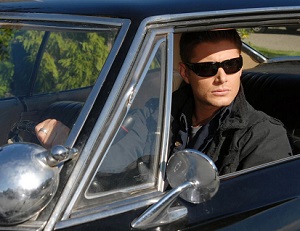 “We are doing an entire episode [titled ‘Baby’] in the Impala,” Carver revealed. “It’s going to touch on, ‘What happens in the moment when they agree to take a case and normally you cut to whatever and they’re walking in? What if you stayed in the Impala for another five minutes? What do they talk about then?'”

For Ackles, the special hour eagerly evokes a certain Tom Hardy film that takes place entirely in a car — as well as some anxiousness.

“I’m excited about that [episode],” Ackles said. “I’ve watched that movie Locke. Fantastic movie. But then I’ve also seen the movie Buried with Ryan Reynolds. It was great. Ryan did a great job, but all I wanted to see was just a shot of the desert. ‘Just get me out of the box for a second! Give me an establishing shot! And then we can go back in the box.’ And of course, it never happens, so it felt a little claustrophobic.

“But with Locke, I never would have imagined that sitting 90 minutes in a car would have been as interesting as it was. So if that’s the formula we have to follow, I’m very nervous. We might have to call Tom Hardy and have him come over and guest-star in that one,” he added with a laugh.

(With reporting by Andy Swift)