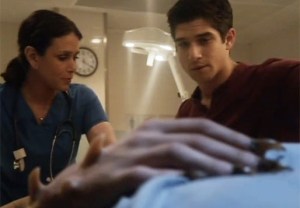 Teen Wolf is throwing so many new creatures and concepts our way this season, I’m starting to feel like Scott in that hellish science class. So let’s talk about the latest addition to the Beacon Hills encyclopedia: “chimera.”

That’s apparently the breed of creature — in this case, a mixture of werewolf, eagle and kanima — being cooked up by the Dread Doctors, which Scott and his pals discovered Monday after battling new-chimera Lucas at an underground gay club. (And I stand by my tweet that, even with half of the action literally set at a gay bar, this episode was only marginally gayer than most. It was great.)

Despite all this newfound knowledge, though, we’re still not sure for what purpose these chimera are being produced. In fact, following Malia’s discovery of an apparent science fiction book about the Dread Doctors, can we even be sure they’re real? I know that seems like a crazy question, but let’s be honest, far wackier inquiries have been posed during the past four seasons.

(Side note: I loved Scott’s pep talk from his mom at the end of the hour, and I’ll definitely be using her line about “should-ing all over yourself” in my daily life. I’m so glad she’s in the know.)

Elsewhere in Beacon Hills this week…

NEW THEO-RY | Cody Christian’s character has always been a bit of an oddball, doing enough good deeds (saving Lydia!) to balance out his not-so-good deeds (dat hammer scene!) and keep us guessing as to whether or not he can really be trusted. But after this week’s episode, particularly the part when he told Donovan to hurt Stiles in order to make Sheriff Stilinski suffer, I’m willing to just throw him in the garbage pile. Also, is he working with the Dread Doctors? And is this all part of his plan to come between Scott and Stiles, as revealed by showrunner Jeff Davis during Teen Wolf‘s Comic-Con panel? Once a Pretty Little Liar, always a Pretty Little Liar, I guess. 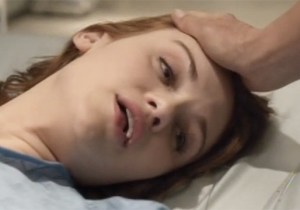 FIGHT SONG | During our interview at Comic-Con (which you can see in full below), Holland Roden told me we will see Lydia develop the kick-ass abilities she demonstrated in the season premiere, and this week, a conversation with Parrish laid down the groundwork for that physical education. After getting her tail handed to her — so to speak — by Tracy, our girl Lydia ended up in the hospital, where she begged Parrish to teach her a little jiu-jitsu.

Speaking of Lydia and Parrish, it also looks like she’s finally helping him find out what he really is. At the top of the hour, he took her through a recurring dream, one in which he places burning corpses at the base of the nemeton — which you’ll remember as that supernatural stump from Season 3, not the mythical swamp creature from Doug; that’s a neematoad. Only it wasn’t just a dream, because the episode ended with Parrish delivering Lucas’ body to the tree! All this weird feeding… it’s like Little Shop of Hotties up in here.

Your thoughts on this week’s Teen Wolf? Do you think Theo is working with the Doctors? Are they even real?! Watch our Comic-Con interview with the cast below, then  drop a comment with your full review of the hour.