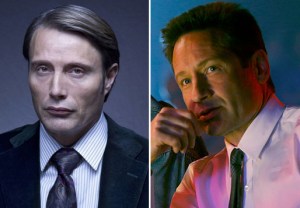 Hannibal and Aquarius now have a standing date on Saturday nights, TVLine has confirmed.

The change, first reported on Twitter by Wall Street Journal media reporter Joe Flint, makes sense in the case of the recently cancelled Hannibal: NBC essentially is burning off the remaining episodes of the Hannibal Lecter thriller’s third and final season, like it did with Smash.

But less than a month ago, the Charles Manson drama Aquarius was (surprisingly) renewed for a second season — a status that makes its weekend move puzzling. Flint reports that the change is to “appease [NBC] affiliates not happy with their numbers.”

Aquarius‘ May premiere averaged 5.7 million total viewers and a 1.0 rating; by its July 3 episode, those numbers had sunk to 2.4 mil/0.4.

Dateline Thursday Mysteries will fill the 9-11 pm block left open by the dramas’ departures, starting this Thursday. Aquarius will air Saturdays at 9/8c followed by Hannibal at 10.