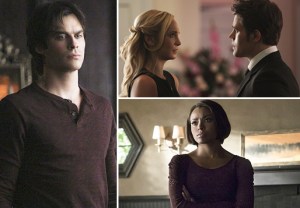 When last we left our friends in Mystic Falls, Stefan was declaring his love for Caroline, Matt was suiting up to protect the town and Elena was embarking on the nap of a lifetime — much to Damon’s dismay. So, what’s to come in Season 7?

That question, among so many others, is what the stars and executive producers of The Vampire Diaries tackled Sunday during the show’s San Diego Comic-Con panel.

Frankly, there was lot said, so it might be easier just to relay this in bullet form:

* For starters, the old Damon — as Ian Somerhalder describes, the “sexy, volatile, fun, dangerous” Damon you fell in love with in Season 1 — will return in Season 7.

* Adds executive producer Julie Plec, “The challenge for Damon is that Elena said to him, ‘Please live your life and be who you are.’ But we know who Damon is. So for him, it’s ‘Who am I without this girl right by my side?’ We’re going to see a lot of naughty Damon trying not to be naughty.”

* As for Stefan and Caroline’s budding relationship, Plec promises “a lot of very unexpected twists and turns. The fun of this couple is that they’re just getting cemented in their romantic status. As we left it off, he said, I will be here when you’re ready.’ She’s trying really, really, really hard not to be ready.” Also, “shirtless stuff every episode.”

* Adds Candice Accola, “I love a good slow-burning relationship that you get to watch build. I really like [Stefan and Caroline] together. The few scripts we have read, I’m really excited for you guys to see.”

* Enzo’s got quite a dilemma on his hands in Season 7. Says Michael Malarkey, “It’s about choosing his allegiance. Does he go with Lily and the Heretics or does he side with Damon? It’s a struggle for him.”

* In terms of the next Big Bad, executive producer Caroline Dries admits that “the challenge for the writers is constantly topping the villain from the previous year. Kai is one of the best villains we’ve ever had on the show. By bringing in Lily’s family, it’s these six villains who can do magic — and they’re vampires. It’s going to be exciting and gruesome and violent.”

* We’re also going to see how Mystic Falls devolved into the polluted, run-down mess we saw at the end of the Season 6 finale

* Nora and Mary-Louise, the new vampires TVLine exclusively revealed earlier this month, are going to be a couple of “nasty, nasty, nasty girls,” according to Plec.

* Bonnie and Damon’s friendship will continue to blossom in Season 7, which is good news for Somerhalder. “The beginning of Season 6 for Bonnie and Damon was the best stuff ever,” he says. “It was fun and very dynamic. It’s an amazing recipe for a lot of cool drama.”

* Lastly… any hope for Klaus’ return to Mystic Falls? “I don’t know if Caroline really wants him back in Mystic Falls,” says Accola.

Your thoughts on this year’s TVD panel? Your hopes and fears for Season 7? Drop ’em all in a comment below.