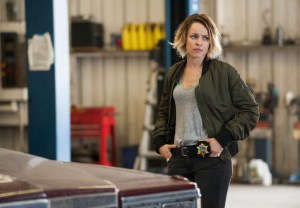 Anyone else getting the feeling that the kindest thing the men and women of True Detective can do is douse Vinci in gasoline, strike a match and leave the cesspool of a city to flame out of existence?

Because the more Ani, Ray and Paul try to solve Ben Caspere’s murder, the worse things get — professionally and personally at first, but then bloody and brutal at the end of the hour. And no one really thinks that the town manager’s murderer died in that shootout, do they?

We got a lot of Frank begging for money and Ani looking irked this week, but there were some important-seeming bits of info mixed in, too. Well, that is, until the gruesome battle that brings the episode to a close (and makes Bezzerides’ previous raid-fail look like something off a Pinterest page).

Read on for the highlights of “Down Will Come.”

RELATED Summer TV Calendar: So Many Dates to Save!

POOR PAUL | Let’s start with Paul, who wakes up in the bed of the guy he shoved to the ground in last week’s episode. Though Woodrugh is fuzzy on the details, apparently all of those drinks he downed at the club made him think it was a good idea to meet up with his Army buddy and do a little late-night reconnaissance in their boxer briefs. Poor Paul is incredibly upset with himself when he realizes what’s happened, and he cries in the backseat of a taxi on his way back to the bar to pick up his bike.

His bad day gets worse when the bike’s been stolen, and an attempt to walk back to his hotel lands him in the middle of a pack of reporters wanting to know about the actress he allegedly boned and the Black Mountain business we still don’t know much about. Out of options, Paul calls Ray, who gives him a ride, a hangover cure and a pep talk. “You’re a survivor. Everything else is just dust in your eyes. Blink it away, man,” Velcoro says… not knowing what awaits our war hero when he has coffee with his kinda-ex-girlfriend, Emily.

She’s pregnant, and she’s keeping it, she informs him. Get ready for the worst idea you’ve ever heard in 3… 2… “I want you to, and I think we should get married,” he says, going on to tell her he loves her while sporting some truly crazy eyes and grimacing in what I think he thinks is a smile.

“This is the best thing that could happen,” he says unconvincingly as they sit side-by-side in a diner, looking less like newly engaged lovebirds and more like a couple who’s just been told their luggage was lost.

DESPERATE TIMES | Semyon still needs money, so he continues his this-is-really-beneath-me tour of former business contacts and menaces them into tossing a little cash his way. I forget, Frank, was it “You never want to look hungry” or “You always want to look hungry and exude a desperation so strong people have to Febreeze after you leave the room?” Because, dude, you’re doing the latter.

Jordan still wants to board the baby train with him, their failed clinic visit notwithstanding, and she’s willing to talk adoption. “I don’t do somebody else’s time,” he replies. Charming.

ANI ARE YOU OK? | Fine, fine — you guys were right: The car that was set on fire in the last episode was the Cadillac that transported Caspere’s body and not Ray’s own ride (like I thought). Next time we’re all at that dingy bar with that maudlin singer, drinks are on me! Ray warns Ani to back off her interest in Vinci Mayor Chessani, saying that the entire investigation isn’t intended to yield any real results and that she and Paul (and possibly himself) are likely to be sacked at the end of it as part of the state’s deal with the city.

Ani takes all of this under consideration for about two seconds and then does what she wants to do, anyway: She and Ray question the mayor’s daughter, Betty, who mentions that her dead mother hung herself in a mental institution and that Dr. Pitler — the weird-looking psychiatrist Caspere was seeing — was the doc in charge of her care. A trip to see Ani’s dad at the retreat reveals that Pitler, the mayor and Eliot Bezzerides all ran in the same circles back in the day. A final point of interest comes when Ani visits her sister, Athena — she of the webcam masterpieces — and she mentions that she’s not a hooker and she’d never do “one of those parties” she’d heard about. But Caspere sure liked those parties, right? (Side note: I am not well versed in these things, but isn’t “I’m only doing this until I have enough money for college” a frequent refrain heard among the exotic-dancers-and-such set?)

Back at county sheriff’s headquarters, Ani’s superior lets her know that Steve, the guy she dumped last episode, has filed a harassment complaint against her. And that, coupled with the fact that she slept with her partner — “Once!” she growls — means she’s not allowed in the building until the department’s investigation into her conduct is concluded.

BLOODY HELL | So by the time Caspere’s pawned watch lead to a pimp suspected of the murder, everybody needs a win. Ani leads a raid to grab the man, Ledo Amarilla, but a sniper with a machine gun sees them coming and ambushes them. What follows is a long, harsh, violent sequence in which part of a building blows up, many police officers (including the slovenly cop who saw Paul with his friend at the bar) die, an SUV crashes into a city bus and then even more civilians perish before Ledo himself is taken out. Though Ani, Ray and Paul survive, they’re all quite messed up about it afterward. And all I can think of through the entire gunfight is that the series’ first season — with that long, gorgeous single shot in Episode 4 — did it better.

Now it’s your turn. What did you think of the episode? Thoughts on why the first episode of the season started with a shot of those stakes in Fresno? Sound off in the comments!