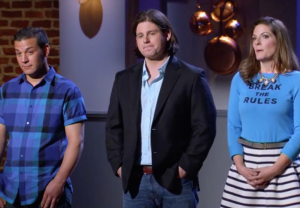 Quick! You’re a Food Network Star judge watching a contestant squander a live, four-minute cooking demo by rotely listing ingredients, offering no personal anecdotes and failing to even touch upon the improv-storytelling requirements asked of him by special guest David Alan Grier. You’ve got a ridiculously easy target for elimination, right?

Actually, hold up a moment. A second hopeful — despite his boss-level cooking skills and general adorableness during confessionals — sweats like he’s midway through a triathlon, freezes up after only 60 seconds, then flees the scene like his face is on an FBI Most Wanted poster and his audience consists completely of law-enforcement agents. Perfect pick for the guillotine, yeah?

Think again. Lucky for Alex (aka Doomed Chef Walking) and Dom (The Little Staten Island Engine That Hasn’t Quite), icy-but-interesting Emilia decided the midway point of Season 11 was the perfect time to fling caca as indiscriminately as a caged zoo monkey — leaving poor Giada De Laurentiis covering her ears in an attempt to block out the meltdown that nobody wanted to see/hear/get within 50 feet of.

Maybe Emilia — whose Andouille sausage onion-rings looked pretty tasty — could’ve survived her misguided decision to spend half her demo mocking her rival chefs (though her mincing imitation of drag queen Albert was especially brutal, no?), but when she subsequently slipped on a sweater emblazoned with the words “Break the Rules” and declared that she was “really proud” of her performance as an “Alpha female,” the outcome was as pre-determined as a stick of butter in a Barefoot Contessa dessert. Don’t these contestants ever learn that likability/relatability is just as important as, say, one’s ability to julienne a carrot?

With Emilia’s ouster, we’re now down to six folks still in with a chance of following in the footsteps of Aarti Sequeira (still miss her show, BTW), Damaris Phillips (her chili recipe is amahhhhzzz), Guy Fieri and that phony cowboy chump from last year who everyone on Food Network is contractually obligated to never, ever mention again.

Aside from the results, the major takeaways from the week included:

* Eddie reestablishing his front-runner status with a jalapeno-fruit dessert pizza that wowed the CEO of CC’s and a slightly cheesy but still charming effort in the main challenge topped off by some delicious-looking fried quail. (Side note: Dude has mentioned his lovely wife in prior demos — so perhaps he should dial back the “hey, ladies” flirtation in his shtick, yes?)

* Arnold dropping off my list of potential winners thanks to his incredibly stiff demeanor every time he’s doing a demo. Sure, all the words coming out of his mouth sound perfectly fine — and the judges never seem to hate his food — but unless he’s hiding a much more interesting drag persona (and willing to bring out that persona next week), he’s missing the “Star” component crucial to the show’s goals.

* Jay somehow managing to combine calamari, pink lemonade and black rice into a really tasty dish — and positioning himself as the clear alternative to Eddie in what’s quickly turning into a two-cook race. (C’mon, I don’t see any hope for Arnold and Alex, Michelle’s limited food vocabulary disqualifies her… leaving only camera-averse Dom as the dark horse.)

* And finally — with Bob and Susie finally back on the panel (huzzah! love them!), it was up to Bobby Flay to stick up for Dom, doubling down on his belief that the NYC food-truck operator is the flick of a switch away from becoming a legit hosting prospect. I mean, let’s be real — his food authority is unassailable at this point, given his consistently yummy (and visually appealing) creations. Here’s hoping he stops being his own worst enemy — pronto!

What did you think of this week’s Food Network Star? Who would you have sent packing? And who do you think will make up the Top 3? Sound off below!