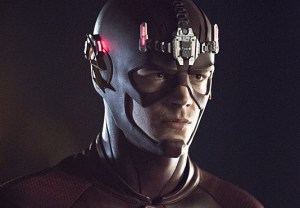 A new foe is zooming into The Flash.

Yes, you guessed it — Zoom is the Big Bad for the CW series’ second season, it was announced at the show’s Comic-Con panel on Saturday night.

Barry has his work cut out for him chasing Zoom because the new enemy is faster than both Reverse-Flash and Flash.

While the particle accelerator allowed the show to bring on metahumans, the wormhole ushers in “characters from Earth 2,” executive producer Greg Berlanti previewed.

To that end, Season 2 will also intro the first scarlet speedster, Jay Garrick (to be played by Teddy Sears), in addition to Barry’s new love interest Patty Spivot (Shantel VanSanten) and Wally West.

Also revealed in the panel discussion:

* Season 2 kicks off “a few months later. We deal with the fallout of the cataclysm that happened at the end of the year,” Berlanti revealed.

* “We find Barry dealing with some extra tension,” star Grant Gustin previewed. “He knows that Eddie was ultimately the hero that stopped Wells in the finale and saved everybody. We find him struggling with his role as a hero. He’s a lone wolf, working alone.”

* After his encounter with Eobard Thawne and his Vibe revelation, Cisco is dealing “with that change and what Eobard Thawne told him” and if it’s the truth, Carlos Valdes described.

* Iris has a “new sense of agency,” said Candice Patton, adding that she’s found herself filming in S.T.A.R. Labs more. “‘Iris part of the Flash team” and provides “the heart and earth” while Cisco and Caitlin are the technology and science.

* Be prepared to go ape again — Grodd will return.