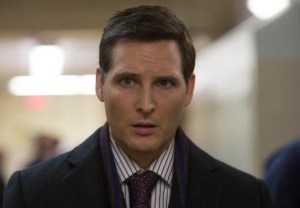 The Nurse Jackie alum and Twilight actor will recur on Supergirl as the iconic DC Comics character Maxwell Lord, it was announced at the show’s Comic-Con panel on Saturday.

Maxwell has a storied past in the canon as a powerful business man involved with the Justice League. He fluctuates between being a villain and a hero.

On the CBS series, Maxwell is a green-tech billionaire who enjoys a friendly rivalry with Calista Flockhart’s Cat Grant and a fascination with National City’s new hero, Supergirl.

“[Executive producers] Greg [Berlanti], Ali [Adler] and I have been fans of Peter for years,” EP Andrew Kreisberg said in a statement. “We’re beyond thrilled to have him join us on Supergirl’s first adventures bringing the iconic Maxwell Lord to life.”

Thoughts on Facinelli’s casting? Share ’em in the comments below!