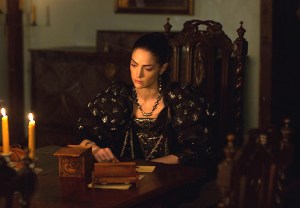 Salem‘s cauldron was bubbling over with good news Saturday: The witchy drama will return for a third season, the series announced at its Comic-Con panel.

Production on the third season will begin later this year; the series will be back in late 2016.

Are you excited to hear about Salem‘s good fortune? Sound off in the comments!