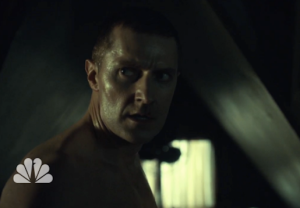 Who needs Amazon and Netflix when you’ve got the big screen?

Recently axed NBC drama Hannibal is “looking at the possibility of a feature [film],” executive producer Bryan Fuller revealed at the show’s Comic-Con panel on Saturday. “[Stars] Hugh [Dancy] and Mads [Mikkelsen] are committed to this show.” Following a break after the close of Season 3, the EP hopes that “we’ll find a way to bring Hugh and Mads back to you.”

Dancy echoed the sentiment, saying that he would definitely like to continue telling Will Graham’s story. “It’s an emotional thing for all of us,” he described of the show’s abrupt end. “And it’s not over in the sense that we were living this thing.”

As for what happened with the talks about moving the show to a streaming service, “Netflix couldn’t do it because of the Amazon streaming [deal],” Fuller explained. “And Amazon would have liked to have done it, but they wanted to do it very quickly, [while] I wanted to get all the scripts [written] in advance.” That made Amazon’s desired schedule “just impossible to do for us.”

Despite the cancellation, Fuller gave props to NBC, which “allowed us to do some crazy s–t for three years,” he said.

Press PLAY on the video below — which was shown during the panel — to get your first look at the series’ Red Dragon in action.