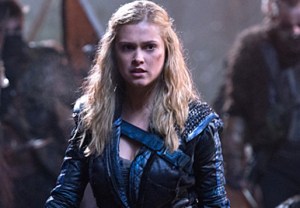 The survivors of the Ark, among others, cleaned up real nice for The 100‘s San Diego Comic-Con panel Friday, where they dished the dirt (sorry, another show pun!) on what’s to come in Season 3.

“We’re going to have our first time jump between seasons,” Rothenberg revealed at the top of the hour. We’re going to pick things up … a couple months after Clarke bailed on her people. The A.I. story [in that mansion] really sets us in a new, much more … science-fiction direction.”

Read on for the stars’ teases for their characters’ future (keeping in mind they haven’t started filming Season 3 yet):

CLARKE | “She’s gone bats–t crazy,” Taylor says. “What she did at the end of the season was so huge and traumatic, so she’s running away, which is very un-Clarke-like. When we pick things up, I think she’s going to be losing it a little.”

“I suppose there’s hope for reconciliation [between Clarke and Lexa], because Alicia Debnam-Carey is coming back to the show,” Rothenberg reveals, adding that there will be fireworks between the two women like we’ve never seen before. “Clarke is pissed.”

As for Clarke and Bellamy’s potential future together, Rothenberg simply says, “You never know.”

BELLAMY | “Clarke left him there to [be a leader],” Morley says. “So I imagine he’ll just do what Clarke couldn’t do, which is to become a leader.” (Burn?)

OCTAVIA | “Octavia hasn’t really fit in anywhere, growing up under the floor,” Avgeropoulos jokes (sort of). “Through Lincoln, she really found her place within the world. The Grounders brought out the warrior in her, so I think she’d have a hard time going back to the Arkers and being resentful towards those people.”

RAVEN | “I think she’s still a little bitter [about her injury],” Morgan says. “For her to lose a certain strength, but to find an even greater strength in learning how to live and operate no matter what, shows her inner strength. I get the opportunity to portray someone with a disability on TV; I think that’s really important.” 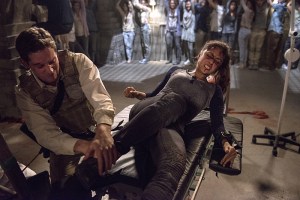 “At the end of Season 2, she was in a really precarious position,” Morgan adds. “As much as she doesn’t want to admit it, she’s delicate … and emotionally, she’s really living her life without Finn, feeling that grief. There’s someone new in her life as far as Wick coming in, which is a whole new obstacle for her. You’re going to see a new Raven; she’s trying to rebuild herself, piece by piece.”

LINCOLN | “We’re all molded by our experiences,” Whittle says. “The good thing about Lincoln is that his moral compass has never changed. … He’ll continue to make immense sacrifices for his beliefs and for Octavia.”

TVLine will have more scoop on The 100‘s future later this week — including our own video interview with the cast — but for now, drop a comment with your thoughts on the panel. What are your hopes for Season 3?