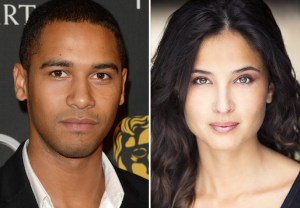 Turns out, Merlin is a Knight.

ABC’s Once Upon a Time has cast British Sinbad alum Elliot Knight in the recurring Season 5 role of Merlin, whom viewers know holds the answer to expunging the Darkness from the world forever — and thus can save Emma from her new fate.

Additionally, our sister site Deadline reports, Portuguese actress Joana Metrass has landed the recurring role of Guinevere, the queen to King Arthur (to be played by Liam Garrigan).

As previously reported, Sinqua Walls (Teen Wolf) is set to reprise his role as the knight Lancelot aka Guin’s OTL.

Knight’s previous credits also include the BBC One drama By Any Means and a How to Get Away With Murder arc, while Metrass’ resume includes the Portuguese drama series Sinais de Vida and Morangos com Açúcar.

Lastly, Wayward Pines mailman Andrew Jenkins will guest-star as  Percival, one of Arthur’s most loyal knights.