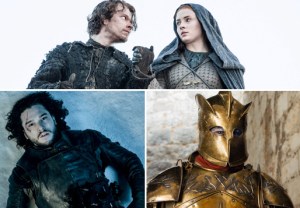 Is Jon Snow coming back in Season 6? Did Stannis Baratheon really die by Brienne’s sword? And what’s next for Cersei, following her figurative de-throning? These were (among) the burning questions on fans’ minds at the top of Friday’s Game of Thrones panel at San Diego Comic-Con.

And now that the HBO drama has finally — though that’s probably not the best word — surpassed George R.R. Martin’s A Song of Ice and Fire book series, the panel was indeed full of revelations (even if they weren’t the ones fans were hoping for).

* Alfie Allen said he’s glad to see there’s a light at the end of the tunnel for Theon/Reek in terms of regaining his humanity. He also would have liked to see that story get darker — if that’s at all possible.

* Having sex with Gilly has absolutely changed Sam, presumably for the better. “Before Gilly, Sam thought of sex as most people thought of space,” John Bradley said, adding that Sam “just had a massive forearm.”

* Gwendoline Christie said she’s fully aware the fans are mad at Brienne for missing Sansa’s candle, but she’ll defend her character’s actions to her death. “I didn’t blow the candle,” she insisted. “I had to stand for three months, watching a window for a candle. Give me a break!”

* Before you go calling Davos a traitor for abandoning Stannis and Shireen — though you might have already, in which case I can’t stop you — Liam Cunningham insists, “I did try to stay!”

* As for Arya’s lack of sight in Season 6, Maisie Williams said she honestly doesn’t know how Arya’s going to handle it. (My assumption: like a boss.)

* A sizzle reel of the cast’s original auditions was screened during the panel. Enjoy the heck out of it below:

* Though she’s in the dark about Margaery’s future, Natalie Dormer said she assumes there will be a whole mess of trouble ahead, considering Lady Olenna isn’t able to protect her anymore.

* Stannis’ fate wasn’t addressed directly at the panel, but director David Nutter tells Entertainment Weekly: “From the very beginning, and [through] the script process, that was the intent — he’s dead.”

* “There’s one thing Sansa still is, despite what happened to her, and that’s strong,” Sophie Turner said of her beaten-down character. As you might expect, there was much applause. She also said she doesn’t know why the focus was on Reek during that infamous wedding-night scene, because she was giving a “great performance.”

Your take on this year’s (largely spoiler-free) panel? Your remaining hopes for Season 6? Drop ’em all in a comment below.