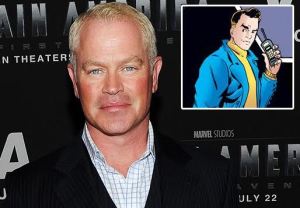 Arrow is going Darhk in Season 4.

Neal McDonough is joining the CW superhero drama in the pivotal (and series-regular) role of Damien Darhk, TVLine has learned exclusively.

The ominously named Darhk played an unseen role at the close of Arrow Season 3, as Ra’s Al Ghul regaled Oliver with a tale about his colleague-turned-adversary. Darhk even paid Starling City a visit, but got outta Dodge before causing any commotion (and before being seen by viewers).

Arrow producers are billing Damien as “a mysterious and sophisticated villain, and an adversary of the late Ra’s Al Ghul. Now the leader of his own clandestine group, this cunning foe will prove to be one of the Arrow’s greatest challenges.”