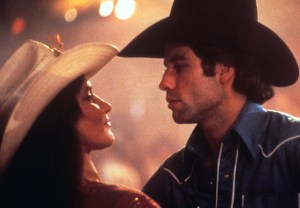 Fox has ordered a one-hour drama pilot based on the 1980 John Travolta movie, the network announced Thursday.

Per the official logline: “Fueled with energetic music, [Urban Cowboy] follows Kyle and Gaby, two star-crossed young lovers, as they pursue their dreams and passions through the sweat of line-dancing in honky-tonks, the grime of the oil refineries and the glamor of modern Texas. It’s about family legacies, starting over, finding true love and the American dream.”

The pilot, a “modern reimagining” of the romantic drama that co-starred Debra Winger, will be written, directed and executive-produced by Craig Brewer (Hustle & Flow, the Footloose remake). If ordered to series, Brewer will then executive-produce alongside Robert Evans (a producer on the original Urban Cowboy), Sue Naegle and Chris Levinson (Tyrant).

Does the idea of an Urban Cowboy series make you say “Yee-haw!” or “Dang nabbit!”? Sound off in the comments!