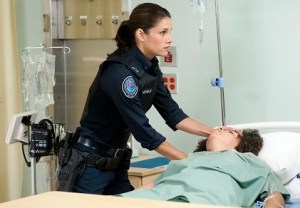 Rookie Blue went all Litchfield on Thursday’s episode as Andy, Juliet, Nick and Gail were tasked with transporting two female inmates. But before they could complete their job, the action turned riotous.

Andy and Juliet are assigned an unpredictable prisoner named Kenzie (12 Monkeys‘ Romina D’Ugo), but it’s Pretty Young White Thing Rochelle (Lyndsy Fonseca look-alike Holly Deveaux) who turns out be the real handful. Although she looks sweet, she’s actually a sociopath who distracts Nick with some babble about how more light shines on her than others before locking him in a hallway. (Oh, Nick. I guess it’s not true what Andy said earlier to Juliet — Nick does have a flaw.)

Kenzie stabs herself during a fight with another inmate, causing a riot to breakout. Then she takes a blade to Juliet’s neck and forces her and Andy to go to the infirmary, where her bestie J-Bird is recovering. Kenzie wants to know why J-Bird is saying that she tried to kill her. As it turns out, Rochelle found out that the guard she was sleeping with also did a favor for J-Bird — if you know what I mean — so she attacked her and forced her to point the finger at her friend. Rochelle makes it to the infirmary and tries to finish the job when the police finally arrive and smoke bomb the place. (Nice upside down shot of Andy being blown back from the explosion by director/star Gregory Smith.) 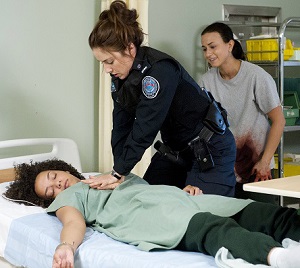 As troubling as a knife to your throat and a prison full of angry inmates are, Juliet has even bigger problems when Kenzie recognizes her from Vancouver. After trying to play it off, the cop is forced to tell Andy that she went undercover with a gang and things got messy when she fell in love with their dealer.

“It was a really dark time in my life and I’m ashamed of it,” she confesses. “I would be really grateful if you could find a way to keep it to yourself.” It’s also unspoken that Juliet doesn’t want this information shared with Nick, given their earlier conversation in which she revealed she’s “crazy” about him. As for the story about Vancouver, is it even real? After all, Juliet tells her mysterious partner she doesn’t like lying to these people. But it can’t all be a fib if Kenzie recognized her, right?

As the riot drama is going on, Gail is trapped in a cell block with an older inmate who offed her husband after he fell asleep with a cigarette, starting a fire that kille their children. The woman warns Gail not to have kids until she’s done everything she wants to do, because after they arrive, it’s all about them and you can’t be impulsive anymore. So Gail impulsively grabs her adoption counselor’s butt — and she doesn’t seem to mind it!

Meanwhile, Sam’s at an appointment with Marlo; the doctor is worried about a possible defect, but she‘s actually fine. (Yes, it’s girl!) Marlo doesn’t want anyone to know about the ordeal, but Sam says he’s going to share with Andy. “I will always be there for you and for the baby, but Andy can’t come third,” he tells Marlo, who notes that that’s a very big promise he’s making to all three of them.

“Where are things going to go with us?” Andy wonders, to which Sam simply replies, “Up.”

Finally, I’m just going to ignore the part where Duncan tries flirting with Chloe, because no. Just no. Don’t go there.

Rookie Blue fans, what did you think of the prison-set episode?