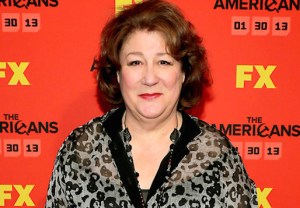 Emmy winner Margo Martindale is joining Season 7 of CBS’ acclaimed procedural in a recurring role — and her character is poised to clash with Alan Cumming’s tightly wound campaign manager.

Martindale (Justified, The Americans) will play Willa Eastman, “a top campaign operative responsible for past successes by underdog presidential candidates in Iowa.” She’s known for “hiding her intelligence and cunning under a fake, folksy charm.”

At the end of Season 6, Eli’s main man, Illinois governor Peter Florrick (Chris Noth), announced his intention to explore a bid for the nation’s highest office — so there’s a good chance Willa will likely be a part of his dark-horse campaign. (Either that, or she’ll be spearheading a bid by one of his opponents.)

“Every year we look for a character and an actor who can go toe-to-toe with Eli Gold and make him blink,” executive producers Robert and Michelle King said in a release. ”So we were thrilled when Margo Martindale agreed to play Willa Eastman. Her ability to mix comedy and drama is unparalleled. And we can’t wait to see how Margo and Alan deal with each other.”

Excited to see Martindale play in the Good Wife universe? Sound off in the comments!