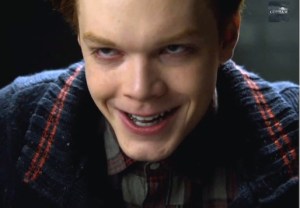 Gotham is dealing a familiar Joker in Season 2.

Gotham opens Season 2 on Monday, Sept. 21, where it now leads into the freshman drama Minority Report.

* Netflix has renewed the Canadian outbreak drama Between for a second season, series boss Jennette McCurdy announced on Twitter:
https://twitter.com/jennettemccurdy/status/618797373267902464

* A&E has ordered to series The Infamous, a crime drama set in 1990s Los Angeles before the race riots, and centered on a gangster poised to break out of South Central and the LAPD detective determined to take him down.

* Regis Philbin is joining NBC’s Today as a contributor to the fourth hour, hosted by Kathie Lee Gifford (Philbin’s former Live! With Regis and Kathie Lee co-host) and Hoda Kotb. The morning show announced the addition on Thursday’s episode.