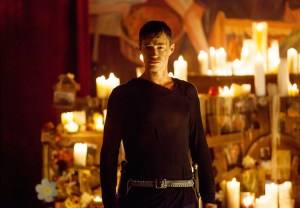 Only a few moments into Dominion‘s Season 2 premiere, a big, fat bomb falls from the skies over archangel Gabriel’s mountain stronghold, seemingly wiping out the winged-one-in-charge and his flying monkeys, I mean, lower angels.

If only it were that easy. Though Claire does, indeed, order the bombing of Gabriel’s area, the action makes an already troubled situation even more tense, and not even the sight of Michael bathing naked in the ocean can make things better. (It comes really close, though.)

Elsewhere, Alex discovers a nifty new talent, William is a bloody pain in his father’s neck and we meet the good (somewhat odd) people of Mallory. Read on for a brief rundown of “Heirs of Salvation.”

ALEX’S BABY MOMS CAME TO DROP BOMBS | Gabriel is menacing and all, but he can’t scare Alex’s tattoos into telling him where God is, so he’s forced to wait until the blonde one’s ink gets to shifting. But when Alex is less than cooperative, Gabriel threatens to renege on his promise to keep Claire and the Chosenspawn safe, then starts to pin (read: drive a spike through) Noma’s wings just to prove his power. Thankfully, that’s the moment that the Claire-ordered airstrike begins, and in the aftermath, Alex and Noma — both miraculously not harmed — are able to escape.

He wants to go to New Delphi to rally their army to his cause. Noma’s all, “Bad idea. I’m going to flap my wings and get Michael back to clean up this mess,” but Alex asks her not to. So the pair hop in an abandoned military vehicle, narrowly avoid an 8-ball enslaught at an abandoned school, run over an angel’s head twice (ew) and then drive off, oblivious to the 8-ball who has stowed away by hanging onto their bumper.

Of course the angel attacks once they stop, but instead of killing him outright, Alex starts chanting, “Sanctify this vessel” while they’re locked in a wrestling hold. At that moment, his tattoos decide to earn their keep, and as they move, the angel is evicted from its human body. Noma is shocked, as is Alex; the process has never worked like that before, he says, but notes — as he gestures to the body on the ground —that the human left behind in the angel’s wake always dies.

Guess what, Alex? This one didn’t die. In fact, he’s a guy named Pete whose last memory before getting 8-balled was that he had a burger. He’s 100 percent alive and has 0 percent memory of being possessed, and when he demands that Noma and Alex take him with them, Alex agrees. Noma gives that decision the side-eye and flaps her wings to summon Michael, but he doesn’t show. And why is that? (Oh, and if you’re wondering, Gabriel survived the attack but Uriel is MIA.)

OUR TOWN | Because Michael is having a tough time after killing Becca and leaving Vega. Fortunately, that inner turmoil is in no way reflected in his heavenly body (I couldn’t resist!), which we get quite a view of while he splashes around nude in the sea. He eventually makes his way to a nearby settlement seemingly untouched by the war that ravaged humanity; it even has a church that’s still standing.

The suspicious residents’ leader explains that the town, named Mallory, is made up of people of all faiths who somehow worked out that if they keep a sacred fire burning in the community square, God will protect them. And it bears out: While the flames are going, the lower angels keep their distance. But when a storm blows in and douses the blaze, it’s a slaughter. Michael fights alongside the Mallory residents until they can get the pyre lit once more; when they do, the 8-balls retreat. Shaken, Michael enters the church and hesitantly/hopefully asks, “Father, are you here?”

VEGA VEXATION | David and Claire butt heads over her military maneuvers. He tries to shock her with some intel that Alex was at Gabriel’s lair, but she already knows: She sacrificed a possible reunion with her child’s father for the greater good, though she later seems less certain of that decision when she discusses it with Arika. Then, when Claire orders that three floors of the Wynn hotel be given to some V1s, David has the place torched. As Arika and Claire plot a way to stop him, William sits in his father’s office and judges him harshly. Wait, William is A) alive and B) back from the desert? Nope — as we see when the camera pans around behind him to show a bloody wound in his head, this David is merely a figment of the senior Whele’s guilty conscience.

Now it’s your turn. What did you think of the episode? Grade the premiere via the poll below, then hit the comments to elaborate on your pick! 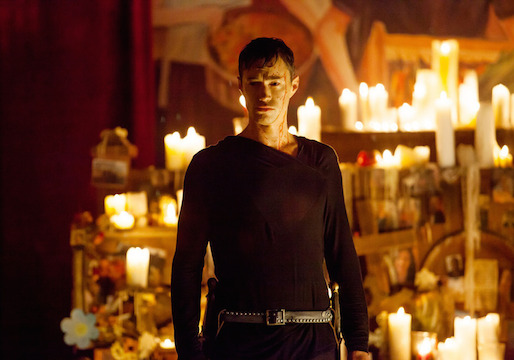