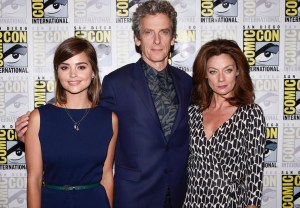 The Doctor and The Master’s frenemy relationship is far from over.

When Doctor Who returns for Season 9 on Sept. 19 on BBC America, “the way Missy comes back into the Doctor’s life is not something you’d predict,” executive producer Steven Moffat teased at the show’s Comic-Con panel on Thursday. “It’s very, very different.”

Missy “has to come at it from a different angle, which is surprising and exciting to play,” her portrayer Michelle Gomez described. “There’s something slightly different to her.”

As for the Master-Doctor dynamic, “It’s kind of like the best friend that you love to hate,” the actress said. “This great friendship that just went wrong. It’s her life’s purpose to chase the Doctor and make him realize that ‘No, you started it. I’m right.'”

“They are friends,” Moffat confirmed. “It’s friendship between a vegetarian and a hunter.” Added Gomez of the characters’ similarities: “We both kill a lot of people. He feels bad about it, I don’t.”

GAME ON | A new trailer for Season 9 featured a cameo from Game of Thrones star Maisie Williams. “You!” the Doctor greets her, to which she replies, “What took you so long, old man?” So what can the EP tease about her character? Not much, sorry. “It’s going to be surprising what she gets up to,” he hedged.

NEW DOC, NEW STYLE | Although Peter Capaldi has brought his own flair, “the difference in how you write the Doctor isn’t that great,” Moffat said. “It’s about what the actors bring” to the role. Could an actress fill that part one day? “There is no vacancy. My opinion is fairly obvious from the show,” Moffat replied, pointing to the gender twist on The Master as example.

IN THE GROOVE | Now that Capaldi has gotten more comfortable as the Time Lord, shooting Season 9 has “been a gas,” he said. “It’s just been so much fun. The writers know me now and want to write for me. Because Clara and the Doctor feel more in a groove, they’re really enjoying being the luckiest people in all of history… They throw themselves recklessly into the pursuit of adventure.” With all that gallivanting, “What could possibly go wrong?” Moffat joked. “The finale!”

BE KIND, REWIND | If the newest incarnation of the Doctor seems gruff to you, it’s for good reason. “[He’s] mysterious,” Capaldi explained. “He’s a time lord. He’s not a guy. But if he was a guy, he’d have my face and be really nice.” He’ll also get some help in the social skills department from Clara next season.