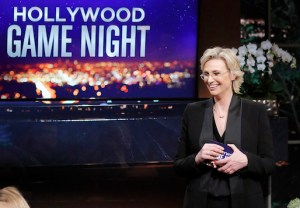 NBC’s Hollywood Game Night opened Season 3 on Tuesday with 5.4 million total viewers and a 1.5 rating, up 35 and 36 percent from its sophomore finale (which self-started an off-season Thursday), drawing its second-largest audience ever and matching a series high in the demo.

The episode also featured perhaps the worst “How Do You Doo?” singer in the show’s history. Sorry, civilian lady!

Opening the Peacock’s night (and surely goosing Game Night‘s haul), America’s Got Talent (10.4 mil/2.2) was down three tenths in the demo.

CBS | Zoo (7.7 mil/1.2, per finals) matched its premiere numbers while rudely and repeatedly teasing the mauling of that poor little boy :(