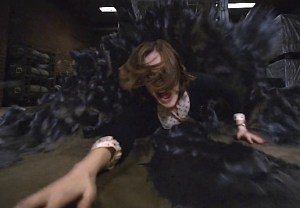 TVLine hits rewind on the TV season’s biggest “What Happens Next?” finales, then invites you to predict the cliffhanger outcomes

Akin to the saying, “The last step’s a doozy,” the very final, bonus scene of Agents of S.H.I.E.L.D. Season 2 was an out-of-this-world jawdropper, leaving viewers — as well as perhaps Fitz! — with questions about Simmons’ fate.

After S.H.I.E.L.D. thwarted Afterlife leader Jiaying’s attempted assault on ill-fated Gonzales’ carrier, things were quiet as a church mouse in the cargo hold, where the mysterious Kree stone was being kept safe. Alas, in the course of sweetly/awkwardly asking Simmons out on a date, Fitz apparently dislodged the latch to the containment bin. After he left, Jemma had just noticed the breach when the Kree stone shape-shifted into a wave of ominous goo, splashed out into the room and gobbled her up good.

This much we know about Season 3: A time jump of some undisclosed length will have passed since that final scare. Plus, Elizabeth Henstridge is part of the ABC series’ Comic-Con press tour. So, Simmons is a keeper in some shape or form….

Rewatch the frightful sequence below, then vote on your predicted outcome.