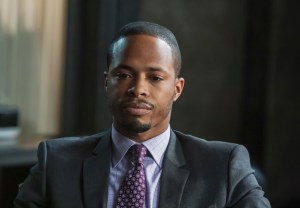 TVLine has learned exclusively that the actor is not only set to reprise his role as activist Marcus Walker in Season 5, but he’ll do so as a full-fledged series regular.

The All My Children alum previously appeared in two Season 4 episodes of Shonda Rhimes’ D.C.-based drama, most notably the powerful Ferguson-esque March 5 outing “The Lawn Chair.”

Details on Smith’s return — including his first episode back — are being kept under wraps.

Thoughts? Excited Smith has joined Scandal‘s full-time ranks? And do you think he’s the subject of a certain blind item? Hit the comments!