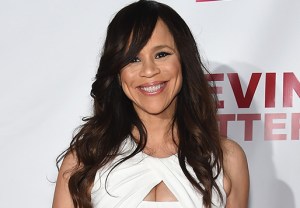 The Hunger Games — sorry, The View — is officially losing another tribute — sorry, co-host. (Oh, who are we kidding? It’s all the same at this point.)

If you’re getting a feeling of déjà vu, it’s because this is the second time word of Perez’s departure has hit the web. The actress had taken the month of January off to rehearse for Larry David’s Broadway play Fish in the Dark, and it was believed she would not be returning to the show.

In fact, the show’s entire line-up has been a bit of a revolving door ever since The View‘s Sept. 2014 reboot. Rosie O’Donnell, who returned after a tumultuous departure in 2007, lasted only a few months before announcing her second exit in Feb. 2015. After a series of temporary replacements, Raven-Symoné was eventually named a permanent co-host in June.

Now, let’s talk replacements: Who should be brought in to fill Perez’s seat? Drop a comment with your recommendation(s) below.