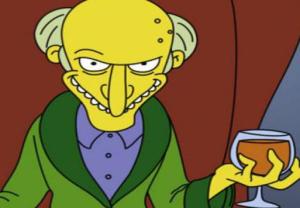 Peace has been restored in Springfield.

Harry Shearer, who has been embroiled in a contentious and very public contract dispute with The Simpsons, has signed a new contract with the venerable Fox series, TVLine has confirmed.

The fresh pact ensures that Shearer will continue to voice such characters as Mr. Burns, Ned Flanders, Waylon Smithers and Principal Skinner for the foreseeable future.

Last month, Shearer announced on Twitter that his contract was not being renewed. (Fox recently picked up The Simpsons for Seasons 27 and 28.) Quoting Simpsons EP James L. Brooks’ attorney, tweeted, “Show will go on, Harry will not be part of it, wish him the best.” Shearer then added: “This because I wanted what we’ve always had: the freedom to do other work.”

Exec producer Al Jean fired back at Shearer, telling the New York Times that, “Harry was offered the same deal the rest of the cast accepted, and passed. The show will go on and we wish him well. Maggie took it hard. We do not plan to kill off characters like Burns and Flanders but will recast with the finest voiceover talent available.”