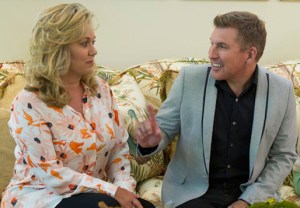 Chrisley broke its ratings record last month with its season premiere, and season-to-date is averaging 2.6 million total viewers (based on all available DVR playback), up 17 percent versus its freshman run. In the 18-49 demo, the show is up 11 percent year-over-year.

“[F]ans can’t get enough of the family’s amusing, unfiltered and relatable moments,” USA Network president Chris McCumber said in a statement. “We’re pleased to [renew] a show that keeps growing its audience, resonates with viewers and always has us guessing what’s next for Todd and his family.”

Season 3 is currently airing Tuesdays at 9/8c, with the midseason finale set for July 21. The back half of the season will air sometime in the fall.

To commemorate Chrisley‘s pick up, here, an exclusive sneak peek from tonight: