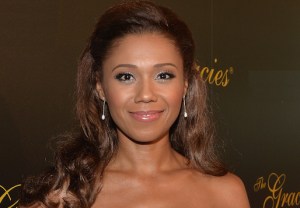 Castle‘s first bit of Season 8 casting is truly out of this world.

Toks Olagundoye, who played the extraterrestrial Jackie Joyner-Kersee on ABC’s The Neighbors, is boarding the network’s Monday-night procedural in the series regular role of Hayley Vargas, TVLine has learned.

To be introduced in the two-part Season 8 premiere (kicking off Sept. 21), Hayley is described as a quick-witted, free-spirited, former Scotland Yard police officer who works as a security specialist and is not afraid to cross lines to get things done.

Olagundoye, who was raised in Nigeria, Switzerland and England, also counts among her TV credits episodes of NCIS, Law & Order and NBC’s Prime Suspect.