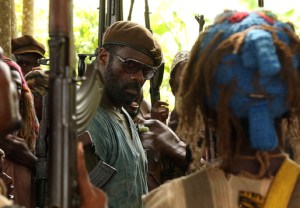 The streaming video service released dates for a spate of original movies, starting with the Idris Elba-starring Beasts of No Nation on Friday, Oct. 16.

Beasts, based on Uzodinma Iweala’s novel, tells the story of Agu (played by newcomer Abraham Attah), who is ripped away from his family and forced to fight in an African country’s civil war. Elba (Luther) plays Comandant, the warlord who mentors Agu. The actor also produced the film, alongside Amy Kaufman (Y Tu Mamá También) and Cary Fukunaga (True Detective).

Crouching Tiger, Hidden Dragon: The Green Legend, starring the 2000 film’s Michelle Yeoh, Harry Shum Jr. (Glee) and Jason Scott Lee (Hawaii Five-0), “echoes the themes of the original movie but tells its own story — one of lost love, young love, a legendary sword and one last opportunity at redemption, set against breathtaking action in an epic martial arts battle between good and evil that will decide the fate of the Martial World,”  according to the official synopsis. The movie will debut in early 2016.

Finally, Pee-wee’s Big Holiday, in which the Pee-wee’s Playhouse denizen played by Paul Reubens takes his first-ever vacation, will premiere on Netflix sometime in March.

Any of the Netflix flicks grab your attention? Sound off in the comments!