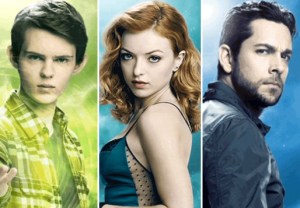 The next generation of NBC’s Heroes is already springing into action.

The network has unveiled 11 animated character posters — because still images are for suckers — giving us our first clues as to what some of Heroes Reborn‘s newcomers will bring to the table.

Robbie Kay’s Tommy, for example, is seen releasing some sort of energy from his hand, while Danika Yarosh’s Malina appears to be blowing a less-than-friendly kiss.

In typical Heroes fashion, most of the new characters’ powers remain a mystery, but we expect to know more as the show’s Sept. 24 premiere creeps ever closer.

Browse the new Heroes cast below, then drop a comment: Who are you most excited to see in action?