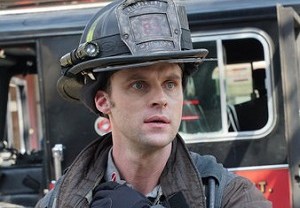 Has anyone seen Matt Casey?

At the close of Chicago Fire‘s Season 3’s finale, the firefighter’s possibly preggers ex-girlfriend Gabby Dawson discovered a gruesome scene at his home.But Casey was nowhere to be found among the wreckage and blood.

That could be a blessing in disguise considering the one person Dawson did find was a dead stripper from the club where Casey was doing construction. So perhaps his life was spared? Or is he somewhere else, even worse off? Whatever the scenario, surely shady club owner/human trafficker Jack Nesbitt (played by Ugly Betty‘s Eric Mabius) is somehow responsible, yes?

With a life-or-death mystery to resolve when the NBC drama returns on Oct. 13, we invite you to rewatch Dawson’s horrifying discovery before reviewing our poll options and sharing your predictions for how the cliffhanger will shake out.