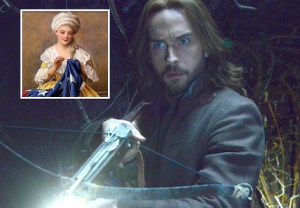 Sleepy Hollow fans, you’re going to be sew excited about this: The Fox supernatural drama is bringing Betsy Ross into the mix for Season 3, and she’s going to be a badass.

You’ll recall that the Colonial-era seamstress, whom legend says stitched together the first American flag, was first outed as one of Ichabod’s former lady friends at the end of Season 1. The show also made reference to the relationship midway through Season 2.

Seems like Ichabod omitted a few details about his thread-happy old flame — because the Betsy Ross Sleepy Hollow wants to cast in a recurring capacity is a sexy, surprisingly strong spy who works within George Washington’s Culper Ring, TVLine has learned exclusively.

“Think more Angelina Jolie than frumpy Martha Stewart — a kickass Mrs. Smith to Ichabod Crane’s Mr. Smith,” reads a character description making the rounds. Betsy “is ruthless, smart and fearless, adjusting to blend in to whatever the situation demands, from demure handmaiden to honeypot to cutthroat spy.”

No word yet on whether Ross will appear only in flashbacks (like Michelle Trachtenberg’s Abigail Adams) or whether she’ll somehow show up in present-day (like Steven Weber’s Thomas Jefferson).

Sleepyheads, who would you like to see play the cunning seamstress when Abbie and Ichabod return on Thursday, Oct. 1 (9/8c)? Hit the comments and let the dream casting begin!