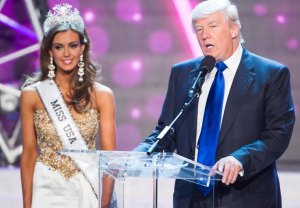 Miss USA is homeless no more.

This year’s pageant, dropped by NBC and Univision in the wake of Donald Trump’s controversial remarks about Mexican immigrants, will air exclusively on Reelz on Sunday, July 12 at 8/7c.

“The decision on the part of Reelz to acquire the rights to the Miss USA Pageant was based on our belief that this special event, and the women who compete in it, are an integral part of American tradition,” said Stan E. Hubbard, CEO of Reelz, in a statement. “As one of only a few independent networks, we decided to exercise our own voice and committed ourselves to bringing this pageant to American viewers everywhere.”

Miss USA co-hosts Cheryl Burke and Thomas Roberts announced Tuesday that they were stepping down from their duties in protest of Trump’s statements, leaving The Real‘s Jeannie Mai to (presumably) emcee the telecast alone.

Pageant producer-turned-presidential hopeful Trump drew widespread condemnation last month when he said Mexican immigrants are rapists who bring crime and drugs across the border. In addition to severing ties with Miss USA, NBC also fired Trump as host of The Apprentice.