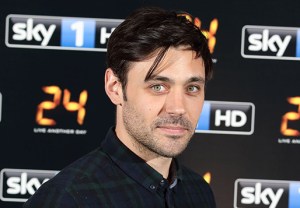 Knights of the Round Table, meet your king.

Once Upon a Time has cast British actor Liam Garrigan (24: Live Another Day) as King Arthur, per EW.com, who as TVLine first reported will heavily recur during the first half of the ABC series’ fifth season.

King Arthur is described as a “good and just ruler” who, beneath the surface, “is a master manipulator who can carry a grudge to the grave, and maybe beyond.” He harbors an “eternal burning love” for the yet-to-be-cast Guinevere that can lean toward being a bit controlling.

Garrigan’s TV credits also include Strike Back and The Pillars of the Earth. He will begin his Once reign in the Season 5 premiere, airing Sunday, Sept. 27, at 8/7c.

* Anthony Mackie (Captain America: The Winter Soldier) has been cast as Martin Luther King, Jr. in HBO’s All the Way, per Deadline. He will star opposite Bryan Cranston (playing Lyndon B. Johnson) in the cabler’s adaptation of Robert Schenkkan’s Tony-winning play.

* In light of NBC’s decision not to air Miss USA (due to Donald Trump’s derogatory comments regarding immigrants), the pageant will be available to stream via Miss USA’s website. No word yet on who will replace Cheryl Burke and Thomas Roberts as hosts of the event.

* E! has renewed its plastic-surgery reality series Botched for a third season, to premiere in 2016.

* Going through Rick and Morty withdrawal? Adult Swim has you covered with a new trailer for the animated series’ return. Press PLAY on the video below for a sneak peek at Season 2, premiering Sunday, July 26, at 11:30 pm.